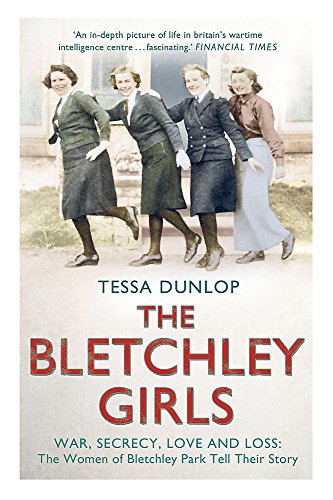 The Bletchley Girls
by Tessa Dunlop

Used Price
£2.69
New RRP £10.99
Free Shipping in the UK
Historian and broadcaster Tessa Dunlop tells the story of the women of Bletchley Park, through exclusive and unprecedented access to the women themselves.
Very Good Good Well Read

The Bletchley Girls: War, secrecy, love and loss: the women of Bletchley Park tell their story by Tessa Dunlop

'Lively...in giving us the daily details of their lives in the women's own voices Dunlop does them and us a fine service' New Statesman'Dunlop is engaging in her personal approach. Her obvious feminine empathy with the venerable ladies she spoke to gives her book an immediacy and intimacy.' Daily Mail'An in-depth picture of life in Britain's wartime intelligence centre...The result is fascinating, and is made all the more touching by the developing friendships between Dunlop and her interviewees.' Financial TimesThe Bletchley Girls weaves together the lives of fifteen women who were all selected to work in Britain's most secret organisation - Bletchley Park. It is their story, told in their voices; Tessa met and talked to 15 veterans, often visiting them several times. Firm friendships were made as their epic journey unfolded on paper.The scale of female involvement in Britain during the Second World War wasn't matched in any other country. From 8 million working women just over 7000 were hand-picked to work at Bletchley Park and its outstations. There had always been girls at the Park but soon they outnumbered the men three to one.A refugee from Belgium, a Scottish debutante, a Jewish 14-year-old, and a factory worker from Northamptonshire - the Bletchley Girls confound stereotypes. But they all have one common bond, the war and their highly confidential part in it. In the middle of the night, hunched over meaningless pieces of paper, tending mind-blowing machines, sitting listening for hours on end, theirs was invariably confusing, monotonous and meticulous work, about which they could not breathe a word.By meeting and talking to these fascinating female secret-keepers who are still alive today, Tessa Dunlop captures their extraordinary journeys into an adult world of war, secrecy, love and loss. Through the voices of the women themselves, this is a portrait of life at Bletchley Park beyond the celebrated code-breakers, it's the story of the girls behind Britain's ability to consistently out-smart the enemy, and an insight into the women they have become.

Dunlop is engaging in her personal approach. Her obvious feminine empathy with the venerable ladies she spoke to gives her book an immediacy and intimacy. * Daily Mail *
An in-depth picture of life in Britain's wartime intelligence centre...The result is fascinating, and is made all the more touching by the developing friendships between Dunlop and her interviewees. * Financial Times *
Lively...in giving us the daily details of their lives in the women's own voices Dunlop does them and us a fine service. -- Erica Wagne * New Statesman *
Dunlop has interviewed some of those Bletchley women still alive and draws on one or two unpublished diaries. These have yielded some good stuff, especially on the particular intensity of wartime sexual relationships. * The Observer *
Dunlop offers us glimpses of the women's lives and expectations, their education, aspirations and personal anecdotes, how they coped with the aftermath of war and what became of them. The combined accounts make for a fascinating social document of women's lives. * Sunday Express *
The 15 extraordinary women interviewed for this book came from backgrounds as diverse as debutantes and factory workers. It's an engrossing read that captures their wildly different experiences. * Choice Magazine *
Tessa Dunlop's The Bletchley Girls tells the story of 15 female veterans of 'Station X', all of whom Dunlop has interviewed at length. * The Guardian *
Tessa Dunlop, author of The Bletchley Girls, documents the lives of 15 remarkable women who worked at The Park and are still alive to tell their stories. * Sunday Telegraph *
By spending time with these fascinating women, Tessa Dunlop captures their extraordinary stories of life at Bletchley Park. * Daily Telegraph *
Brings the unsung heroines of Bletchley into the limelight and gives them a share of the credit that so often goes to their male counterparts. * The Scotsman *
Candid about the hardships and heartaches of wartime work and its knock-on effects. * The Times *
A specially selected team is hard at work attempting - and succeeding - to crack secret German and Japanese codes. Many of their number were women, even schoolgirls - and it is their remarkable first hand stories that form the basis of this fascinating book. * History Revealed Magazine *
Oscar-tipped movie The Imitation Game brought master code breaker Alan Turing's story to the big screen, and tales of the women he worked with during the Second World War can be found in Tessa Dunlop's new book. * Irish News *
Work conducted by women at Bletchley Park during the Second World War is often overlooked, making this a unique history of the period. * The Bookseller *
Not simply a biography of one shared experience, but a generation...unquestionably compelling. * Blackpool Gazette *
Her book, The Bletchley Girls, sees her adding to the understanding of the sheer scale of the work undertaken at Bletchley Park. * Cambridge News *

Award winning broadcaster and historian, Tessa Dunlop has presented several series and one-off documentaries for BBC TV including 'Thames Shipwrecks', 'Coast' and 'Inside Out'. She has authored and presented several documentaries for Radio 4 and the BBC World Service and has written for almost all the major national newspapers. She received the Gertrude Easton History prize whilst at Oxford University, got a 1st in her MA: Imperialism and Culture and has been awarded a PhD scholarship at Sheffield Hallam University.

GOR006827460
The Bletchley Girls: War, secrecy, love and loss: the women of Bletchley Park tell their story by Tessa Dunlop
Tessa Dunlop
Extraordinary Lives, Extraordinary Stories of World War Two
Used - Very Good
Paperback
Hodder & Stoughton General Division
2015-07-02
352
1444795740
9781444795745
N/A
Book picture is for illustrative purposes only, actual binding, cover or edition may vary.
This is a used book - there is no escaping the fact it has been read by someone else and it will show signs of wear and previous use. Overall we expect it to be in very good condition, but if you are not entirely satisfied please get in touch with us.