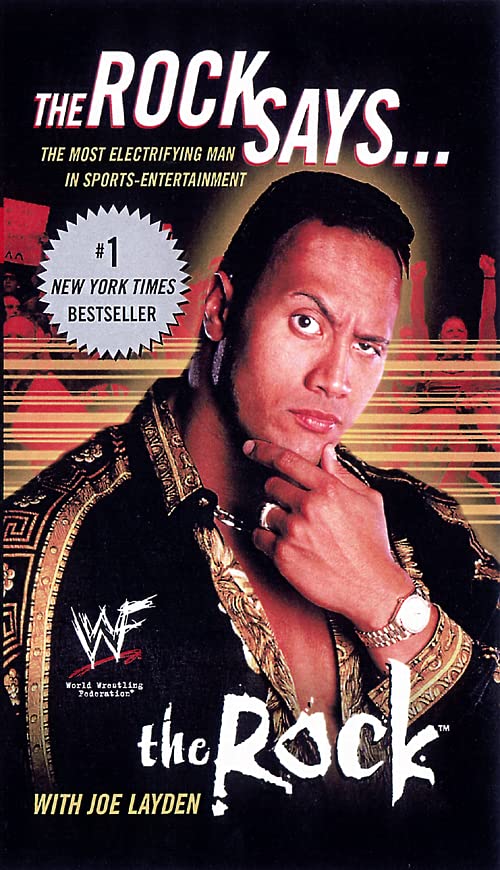 The Rock Says...
by The Rock

The autobiography of the youngest and coolest World Wrestling Federation champion in history and the most electrifying man in sports entertainment.

The Rock Says... by The Rock

The autobiography of the youngest and coolest World Wrestling Federation champion in history and the most electrifying man in sports entertainment.

In this action-packed, revealing and outrageously funny memoir, the WWF superstar The Rock recounts his life in and out of the ring with honesty and inimitable style. From his boyhood days travelling around the world with his father (professional wrestler Rocky Johnson) to his years as a football player at the University of Miami to his meteoric rise through the ranks of the Federation, The Rock Says...chronicles the life story of one of sports-entertainment's most innovative and best-loved personalities.

After an injury-plagued football career at Miami and a subsequent unsuccessful foray into Canada where he lived in squalor, he decided pro football was not for him and he set his sights on following the path of his father and grandfather, High Chief Peter Maivia, and become the world's first third-generation professional wrestler.

Performing first as Dwayne Johnson, then Flex Kavana and later Rocky Maivia, he quickly became one of the WWF's hopefuls. But it was only when he adopted the brash persona of The Rock - a spitting, snorting, swearing son-of-a-bitch with the soul of a smart-ass comic and the body of an Adonis - that he found his true calling as the People's Champion.

The Rock takes the reader on a guided tour behind-the scenes of big-time professional wrestling, a world which has long been shrouded in secrecy. He provides a breathtaking first-hand account of WrestleMania, the Super Bowl of pro wrestling.

Filled with genuinely touching stories of love and strife, hilarious anecdotes, revealing inside accounts of the workings of the WWF industry, and dozens of previously unpublished photographs, The Rock Says... is sure to blow the minds of all WWF fans.

The Rock is a a third-generation pro wrestler and a living WWF legend. He is the youngest world champion in WWF history. He lives in Miami with his wife Dany.

GOR000968715
The Rock Says... by The Rock
The Rock
Used - Very Good
Hardback
HarperCollins Publishers
2000-04-17
304
0007105576
9780007105571
N/A
Book picture is for illustrative purposes only, actual binding, cover or edition may vary.
This is a used book - there is no escaping the fact it has been read by someone else and it will show signs of wear and previous use. Overall we expect it to be in very good condition, but if you are not entirely satisfied please get in touch with us.