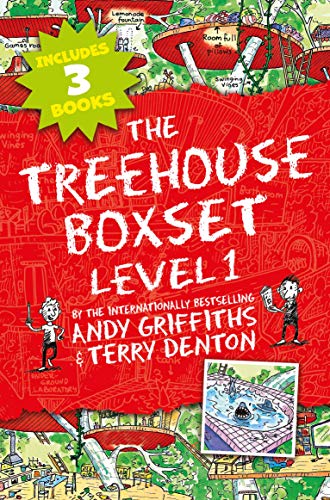 New Price
£14.99
Free Shipping in the UK
Laugh-out-loud adventures in the wackiest treehouse ever! The first three titles in this highly illustrated bestselling series for fans of Diary of a Wimpy Kid and Barry Loser.
New£14.99

Andy and Terry live in the world's COOLEST treehouse! This gift slipcase contains the first three books in the internationally bestselling and hilarious Treehouse series, written by Andy Griffiths and illustrated by Terry Denton.

There's lots of laughs at every level with all the building work Andy and Terry have been doing on their treehouse. They've built an anti-gravity chamber, a room for the boxing elephant called the Trunkinator and a marshmallow machine that follows you around and shoots marshmallows into your mouth whenever you're hungry! Just watch out for the sea monkeys, and the monkeys pretending to be sea monkeys, and the giant mutant mermaid sea monster . . .!

Well, what are you waiting for? Come on up!

With its slapstick humour, brilliant absurdities and some bonus puzzles to solve at the back of the book, The 13-Storey Treehouse is the best 'tall story' you'll read this year! * Lancashire Evening Post *
Longtime collaborators Griffiths and Denton (Killer Koalas from Outer Space) get metafictional in their latest book (first published in Australia), and the result is anarchic absurdity at its best... Denton's manic cartooning captures every twist and turn in hilarious detail, as babies are pelted with garbage, yapping dogs squashed, and monkeys catapulted into the distance. A sequel was published last year in Australia and can't arrive soon enough. -- Publishers Weekly * Publishers Weekly *
Full of crazy, funny pictures, which will make you laugh . . . Extremely enjoyable, very funny and easy to read! -- SophieStarlight * Guardian.com *
Especially good for reluctant readers as it is heavily illustrated and VERY funny . . . This really is the coolest treehouse ever! * Angels & Urchins *
Packed with cartoons and craziness * Sunday Express *

Andy Griffiths is Terry's best mate. He is also Australia's number one children's author! His books, including his popular Treehouse series, have been hugely successful internationally, winning awards and becoming bestsellers in the UK and the USA as well as in his homeland, Australia. The fourth Treehouse book, The 52-Storey Treehouse, won the Australian Book Industry Awards Book of the Year prize, the first children's book to ever do so. Andy thrives on having an audience: he has worked as a high-school teacher, been the lead singer in a rock band and a stand-up comedian. He is a passionate advocate for literacy, has two daughters and lives in Melbourne, Australia.

Terry Denton is Andy's best mate. He is also a bestselling and award-winning writer and illustrator based in Melbourne, Australia. Among other things, he worked on the Horrible Science series for Scholastic UK. He lives by the beach with his wife and three kids.