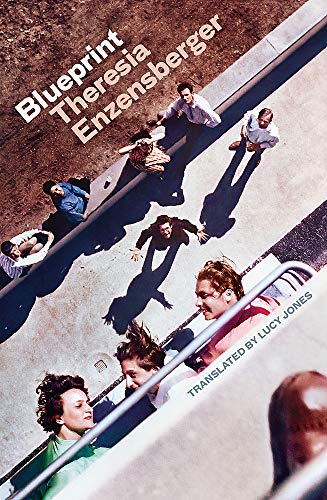 In Stock
£12.99
Fast-paced and highly topical, Theresia Enzensberger's story depicts a young woman in the throes of life: from brutal conflicts between right and left, to a pair of young lovers leaping into a river at night, almost one hundred years ago.
Very Good
Only 1 left

Blueprint: A powerful coming-of-age novel about a female Bauhaus student in the 1920s by Theresia Enzensberger

LUISE SCHILLING WANTS TO TEAR DOWN THE PAST AND BUILD A NEW FUTURE.

At the beginning of the turbulent 1920s, she leaves her father's conservative household in Berlin for Weimar's Bauhaus university, with dreams of studying architecture.

But when she arrives and encounters a fractured social world of mystics and formalists, communists and fascists, the dichotomy between the rigid past and a hopeful future turns out to be a lot more muddled than she thought.

She gets involved with a cult-like spiritual group, looking for community and falling in love with elusive art student Jakob. Luise has ambitions of achieving a lot in life - but little of it has to do with paying homage to great men. Surrounded by luminaries, like Gropius and Kandinsky, she throws herself into the dreams and ideas of her epoch.

While her art school friends retreat into a world of self-improvement and jargon, her home city of Berlin is embroiled in street fights. Amid the social upheaval, she has to decide where she stands. From technology to art, romanticism to the avant-garde, populism to the youth movement, Luise encounters themes, utopias and ideas that still shape us to the present day. Blueprint is a young woman's dispatch from a past culture war that rings all too familiar.

Perfect for fans of The Secret History by Donna Tartt and The Last Nude by Ellis Avery.

This powerful novel tells a story of a time past that feels eerily reflective of the present * Sunday Times *
A coming-of-age story about a female Bauhaus student in the 1920s, exploring themes of politics, expectation and ownership of art * Red *
Bringing to life the Bauhaus movement (which is now in its 100th year), this book follows student Luise as she starts university in 1920s Germany. Full of dreams, she soon gets caught up in a cult-like spiritual group * Elle *

Theresia Enzensberger studied Film and Film Studies at Bard College in New York and writes as a freelance journalist for the FAZ, FAS, ZEIT Online, Krautreporter and Monopol. In 2014, she founded the award-winning BLOCK Magazine. Blueprint is her first novel. Theresia Enzensberger lives in Berlin.

GOR009964192
Blueprint: A powerful coming-of-age novel about a female Bauhaus student in the 1920s by Theresia Enzensberger
Theresia Enzensberger
Used - Very Good
Hardback
Little, Brown Book Group
2019-08-01
240
0349700818
9780349700816
N/A
Book picture is for illustrative purposes only, actual binding, cover or edition may vary.
This is a used book - there is no escaping the fact it has been read by someone else and it will show signs of wear and previous use. Overall we expect it to be in very good condition, but if you are not entirely satisfied please get in touch with us.