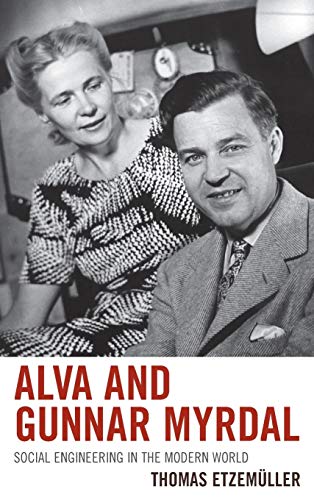 In Stock
£47.99
Thomas Etzemuller examines the impact of two of the leading social scientists of the twentieth century, Alva and Gunnar Myrdal. This study brings to light the roots of modern social engineering, providing insight for today's sociologists, historians, and political scholars.
Very Good
Only 1 left

Alva and Gunnar Myrdal: Social Engineering in the Modern World by Thomas Etzemuller

As two of the leading social scientists of the twentieth century, Alva and Gunnar Myrdal tried to establish a harmonious, "organic" Gemeinschaft [community] in order to fight an assumed disintegration of modern society. By means of functionalist architecture and by educating "sensible" citizens, disciplining bodies, and reorganizing social relationships they attempted to intervene in the lives of ordinary men. The paradox of this task was to modernize society in order to defend it against an "ambivalent modernity." This combination of Weltanschauung [world view], social science, and technical devices became known as social engineering. The Myrdals started in the early 1930s with Sweden, and then chose the world as their working field. In 1938, Gunnar Myrdal was asked to solve the "negro problem" in the United States, and, in the 1970s, Alva Myrdal campaigned for the world's super powers to abolish all of their nuclear weapons. The Myrdals successfully established their own "modern American" marriage as a media image and role model for reform. Far from perfect, their marriage was disrupted by numerous conflicts, mirrored in thousands of private letters. This marital conflict propelled their urge for social reform by exposing the need for the elimination of irrational conflicts from everyday life. A just society, according to the Myrdals, would merge social expertise with everyday life, and ordinary men with the intellectually elite. Thomas Etzemuller's study of these two figures brings to light the roots of modern social engineering, providing insight for today's sociologists, historians, and political scholars.

In the US, Swedish social scientist Gunnar Myrdal is best known for An American Dilemma, his 1944 book on race relations and racism in the US. By that time, however, Gunnar and his wife Alva Myrdal were already prominent as major intellectual contributors to Sweden's planned society. They were also, in the eyes of many people, a model of a modern egalitarian marriage. Etzemuller traces the development of their social views and advocacy and the conflicts that sometimes troubled their publicly idealized partnership. The author places the couple within the historical setting of the creation of the Swedish welfare state. The Myrdals were devoted to their nation's project of establishing a new harmonious community through the rational planning of social relations by experts. From their background in Sweden, the Myrdals became proponents of social planning on a worldwide scale. Although somewhat densely written for general readers, this book will be of great value to upper-level undergraduates and scholars seeking to understand Swedish social democracy, the problems and paradoxes of social engineering, and the life and work of two of the most important social scientists and reformers of the 20th century. Summing Up: Recommended. Upper-division undergraduates and above. * CHOICE *
The relationship between the personal, the political, and the public is at the core of modern politics. By focusing on the self-presentation in words and media images of the Swedish social scientists and reformers Alva and Gunnar Myrdal, Thomas Etzemuller offers a fresh perspective both on their one-time international celebrity status as "rational modernizers" and on the deep contradictions in welfare state ideology between individualism and collectivism, cosmopolitan liberalism, and nationalist state authoritarianism. This book is a compelling and highly readable story that feeds well into contemporary welfare state controversies. -- E. Stina Lyon, London South Bank University

Thomas Etzemuller is adjunct professor of modern history and Heisenberg Scholar at the University of Oldenburg.

GOR009941619
Alva and Gunnar Myrdal: Social Engineering in the Modern World by Thomas Etzemuller
Thomas Etzemuller
Used - Very Good
Hardback
Lexington Books
2014-07-29
382
0739188747
9780739188743
N/A
Book picture is for illustrative purposes only, actual binding, cover or edition may vary.
This is a used book - there is no escaping the fact it has been read by someone else and it will show signs of wear and previous use. Overall we expect it to be in very good condition, but if you are not entirely satisfied please get in touch with us.