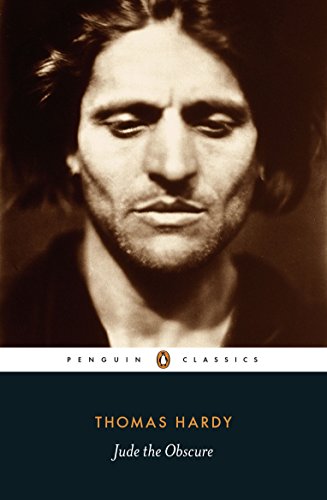 Jude the Obscure
by Thomas Hardy

Out of Stock
£3.59
Moving to Christminster to work as a stonemason, Jude meets and falls in love with his cousin Sue Bridehead, a sensitive, freethinking "New Woman". Refusing to marry merely for the sake of religious convention, Jude and Sue decide instead to live together, but they are shunned by society, and poverty soon threatens to ruin them.
Very Good Good
Only 0 left

Jude the Obscure by Thomas Hardy

Thomas Hardy's last novel, Jude the Obscure is a fearless exploration of the hypocrisy of Victorian society, edited with an introduction by Dennis Taylor in Penguin Classics.

Jude Fawley's hopes of an education at Christminster university are dashed when he is trapped into marrying the wild, earthy Arabella, who later abandons him. Moving to Christminster to work as a stonemason, Jude meets and falls in love with his cousin Sue Bridehead, a sensitive, freethinking 'New Woman'. Refusing to marry merely for the sake of religious convention, Jude and Sue decide instead to live together, but they are shunned by society, and poverty soon threatens to ruin them. Jude the Obscure, with its fearless and challenging exploration of class and sexual relationships, caused a public furore when it was first published and marked the end of Hardy's career as a novelist.

This edition uses the unbowdlerized first-volume text of 1895, and includes a list for further reading, appendices and a glossary. In his introduction, Dennis Taylor examines biblical allusions and the critique of religion in Jude the Obscure, and its critical reception that led Hardy to abandon novel writing.

Thomas Hardy (1840-1928), born Higher Brockhampton, near Dorchester. Though he saw himself primarily as a poet, Hardy was the author of some of the late eighteenth century's major novels: The Mayor of Casterbridge (1886), Tess of the D'Urbervilles (1891), Far from the Madding Crowd (1874), and Jude the Obscure (1895). Amidst the controversy caused by Jude the Obscure, he turned to the poetry he had been writing all his life. In the next thirty years he published over nine hundred poems and his epic drama in verse, The Dynasts.

If you enjoyed Jude the Obscure, you might also like Thomas Hardy's Tess of the D'Urbervilles, also available in Penguin Classics.

Thomas Hardy was born in Dorset in 1840 and became an apprentice architect at the age of sixteen. He spent his twenties in London, where he wrote his first poems. In 1867 Hardy returned to his native Dorset, whose rugged landscape was a great source of inspiration for his writing. Between 1871 and 1897 he wrote fourteen novels, including Tess of the D'Urbervilles and Jude the Obscure. This final work was received savagely; thereafter Hardy turned away from novels and spent the last thirty year of his life focusing on poetry. He died in 1928.

GOR001208974
Jude the Obscure by Thomas Hardy
Thomas Hardy
Used - Very Good
Paperback
Penguin Books Ltd
1998-05-07
528
0140435387
9780140435382
N/A
Book picture is for illustrative purposes only, actual binding, cover or edition may vary.
This is a used book - there is no escaping the fact it has been read by someone else and it will show signs of wear and previous use. Overall we expect it to be in very good condition, but if you are not entirely satisfied please get in touch with us.