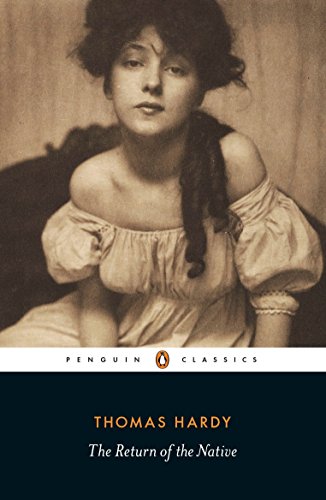 The Return of the Native
by Thomas Hardy

In Stock
£5.49
Against the lowering background of Egdon Heath, fiery Eustacia Vye passes her days, wishing only for passionate love. She believes that her escape from Egdon lies in marriage to Clym Yeobright, home from Paris and discontented with his work there.
Like New Very Good
Only 1 left

The Return of the Native Summary

The Return of the Native by Thomas Hardy

Thomas Hardy's tragic vision of a love struggling to overcome prejudice and rejection, The Return of the Native is edited in Penguin Classics with an introduction by Penny Bouhmelha.

Against the lowering background of Egdon Heath, fiery Eustacia Vye passes her days, wishing only for passionate love. She believes that her escape from Egdon lies in marriage to Clym Yeobright, home from Paris and discontented with his work there. But Clym wishes to return to the Egdon community; a desire which sets him in opposition to his wife and brings them both to despair.

Based on the first edition of the text, this edition includes detailed notes of later revisions made by Hardy, glossary, bibliography and useful chronology of author's life. In her introduction Penny Bouhmelha identifies the literary and classical allusions in Hardy's text, in particular the parallels with Flaubert's Madame Bovary and with the Oedipus story. In so doing she demonstrates Hardy's claim for tragic status for ordinary human lives and the ways that the characters in the novel - especially the ill-fated lovers and Damon Wildeve - spoil their chances to master their own destinies.

Thomas Hardy (1840-1928), born Higher Brockhampton, near Dorchester, originally trained as an architect before earning his living as a writer. Though he saw himself primarily as a poet, Hardy was the author of some of the late eighteenth century's major novels: The Mayor of Casterbridge (1886), Tess of the D'Urbervilles (1891), Far from the Madding Crowd (1874), and Jude the Obscure (1895). Amidst the controversy caused by Jude the Obscure, he turned to the poetry he had been writing all his life. In the next thirty years he published over nine hundred poems and his epic drama in verse, The Dynasts.

If you enjoyed The Return of the Native, you might like Anne Bronte's The Tenant of Wildfell Hall, also available in Penguin Classics.

'The greatest tragic writer among the English novelists'
Virginia Woolf

The Return of the Native Reviews

"This is the quality Hardy shares with the great writers...this setting behind the small action the terrific action of unfathomed nature."
--D. H. Lawrence

Thomas Hardy (1840-1928) was a prolific novelist and poet whose works include 'Tess of the D'Urbervilles' and 'Jude the Obscure'.
Penny Bouhmelha is Professor of English at the University of Adelaide and has published work on Hardy and women.

GOR010516319
The Return of the Native by Thomas Hardy
Thomas Hardy
Used - Like New
Paperback
Penguin Books Ltd
1999-06-24
496
0140435182
9780140435184
N/A
Book picture is for illustrative purposes only, actual binding, cover or edition may vary.
The book has been read, but looks new. The book cover has no visible wear, and the dust jacket is included if applicable. No missing or damaged pages, no tears, possible very minimal creasing, no underlining or highlighting of text, and no writing in the margins.