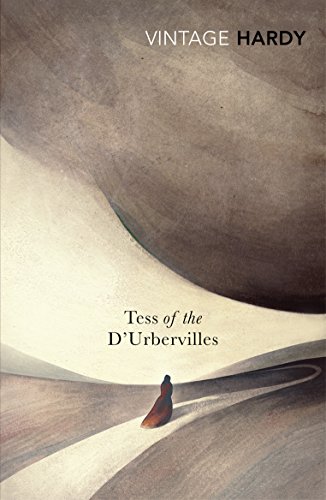 Tess of the D'Urbervilles
by Thomas Hardy

Tess is an innocent young girl until the day she goes to visit her rich 'relatives', the D'Urbervilles.

Tess of the D'Urbervilles Summary

Tess of the D'Urbervilles by Thomas Hardy

Tess is an innocent young girl until the day she goes to visit her rich 'relatives', the D'Urbervilles. Her encounter with her manipulative cousin, Alec, leads her onto a path that is beset with suffering and betrayal.

When she falls in love with another man, Angel Clare, Tess sees a potential escape from her past, but only if she can tell him her shameful secret...

Customer Reviews - Tess of the D'Urbervilles

Tess of the D'Urbervilles Reviews

Thomas Hardy's thrilling story of seduction, murder, cruelty and betrayal * The Times *
Like the greatest characters in literature, Tess lives beyond the final pages of the book as a permanent citizen of the imagination... Tess is that rare creature in literature: goodness made interesting -- Irving Howe
Thomas Hardy's Tess of the D'Urbervilles has a lush sensuality about the heat of summer and the heat of lust which makes the gorgeousness of Hardy's heroine and his country of Wessex both seems utterly desirable as the tale of tragic fate unfolds * The Times *
Hardy never used his "country" and his Greek ambitions to better effect -- Melvyn Bragg
Tess's beauty and the effect that it has on others gave me a sense of the destructive power of sex -- Rufus Wainwright

Thomas Hardy was born on 2 June 1840 at Higher Bockhampton in Dorset. His father was a stonemason. Hardy attended school in Dorchester and then trained as an architect. In 1868 his work took him to St Juliot's church in Cornwall where he met his wife-to-be, Emma. His first novel, The Poor Man and the Lady, was rejected by publishers but Desperate Remedies was published in 1871 and this was rapidly followed by Under the Greenwood Tree (1872), A Pair of Blue Eyes (1873) and Far from the Madding Crowd (1874). He also wrote many other novels, poems and short stories. Tess of the D'Urbervilles was published in 1891 and he published his final novel, Jude the Obscure, in 1895. Hardy was awarded the Order of Merit in 1910 and the gold medal of the Royal Society of Literature in 1912. Emma died in 1912 and Hardy married his second wife, Florence, in 1914. Thomas Hardy died on 11 January 1928.

Anne Michaels' Poems, published in 2000, includes three collections of poetry: The Weight of Oranges, which won the Commonwealth Prize for the Americas; Miner's Pond, which won the Canadian Authors Association Award and was shortlisted for the Governor General's Award and the Trillium Award; and Skin Divers. Her first novel, Fugitive Pieces, was published in 1997 to worldwide critical acclaim. Fugitive Pieces won the Orange Prize and the Trillium Award among others, and was shortlisted for the Giller Prize and the Canadian Booksellers Association Author of the Year Award. Anne Michaels has also composed music for the theatre. The Winter Vault was published in 2009. Born in 1958, Anne Michaels lives in Toronto.