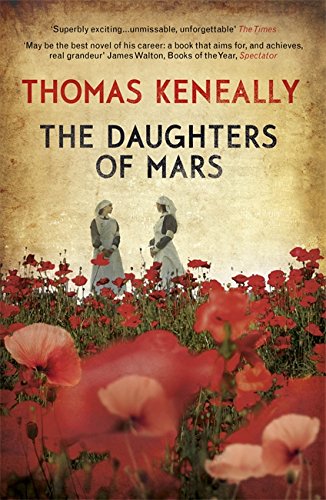 The Daughters of Mars
by Thomas Keneally

In Stock
£2.99
By the author of SCHINDLER'S ARK, a profoundly affecting tale of love, courage and sacrifice and a searing evocation of the First World War from a fresh, female perspective.
Very Good Good
7 in stock

The Daughters of Mars Summary

The Daughters of Mars by Thomas Keneally

In 1915, two spirited Australian sisters join the war effort as nurses, escaping the confines of their father's dairy farm and carrying a guilty secret with them. Used to tending the sick as they are, nothing could have prepared them for what they confront, first in the Dardanelles, then on the Western Front. Yet they find courage in the face of extreme danger and become the friends they never were before. And eventually they meet the kind of men worth giving up their precious independence for - if only they all survive.

At once epic in scope and extraordinarily intimate, The Daughters of Mars brings the First World War to vivid life from an unusual perspective. Profoundly moving, it pays tribute to the men and women who voluntarily risked their lives for peace.

The Daughters of Mars Reviews

Superbly exciting...unmissable, unforgettable. * Kate Saunders, The Times *
'A tour de force of storytelling that is both epic and intimate, experimental and traditional.' * James Kidd, Books of the Year, Independent on Sunday *
Along with a Tolstoyan ability to describe the horrors of battle, this amazing book also has an extraordinary intimacy...an altogether towering achievement. * AN Wilson, Readers Digest *
'May be the best novel of his career: a book that aims for, and achieves, real grandeur' * James Walton, Books of the Year, Spectator *
'Triumphant: this epic saga is one of the best things he has written' * Michael Prodger, Financial Times *
Over and over again, a brief but brilliant phrase turns a statistic into a real person and wrings compassion from you. * Jake Kerridge, Sunday Express *
'Superbly involving' * Catherine Taylor, Books of the Year, Sunday Telegraph *

GOR004757346
The Daughters of Mars by Thomas Keneally
Thomas Keneally
Used - Very Good
Paperback
Hodder & Stoughton General Division
2013-05-23
528
0340951885
9780340951880
Long-listed for Miles Franklin Literary Award 2013
Book picture is for illustrative purposes only, actual binding, cover or edition may vary.
This is a used book - there is no escaping the fact it has been read by someone else and it will show signs of wear and previous use. Overall we expect it to be in very good condition, but if you are not entirely satisfied please get in touch with us.