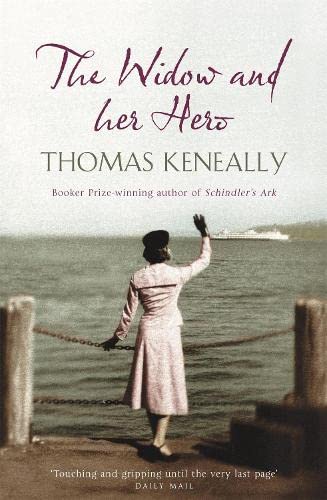 The Widow and her Hero
by Thomas Keneally

By the author of SCHINDLER'S ARK, an enthralling, thought-provoking story of wartime exploits, and the price paid for men's misguided heroism by their widows

The Widow and her Hero Summary

The Widow and her Hero by Thomas Keneally

In 1943, when Grace and Leo Waterhouse married in Australia, they were part of a young generation ready to sacrifice themselves to win the war, while being confident they would survive. Sixty years on, as Grace recounts what happened to her doomed hero, she can say what she suspected then: that for many men, bravery is its own end. The tale she tells is one of great love, lost innocence, a charismatic but unstable Irish commander, dashing undercover missions against the Japanese in Singapore, and - in her eyes - reckless, foolhardy exploits. As fresh details continue to emerge, Grace is forced to keep revising her picture of what happened to Leo and his fellow commandoes - until she learns about the final piece in the jigsaw, and an ultimate betrayal.

As absorbing as it is thought-provoking, this timely novel poses unsettling questions about what drives men to battle and heroic deeds, and movingly conveys the life-long effect on those who survive them.

The Widow and her Hero Reviews

'Touching and gripping until the very last page' * John Harding, Daily Mail *
'Exceptionally good...the work of a master storyteller' * Allan Massie, Scotsman *
'A compelling and deeply persuasive meditation on the moral ambiguities of heroism...a page turner of a thriller as well as an affecting (and very sexy) love story, ingeniously constructed, carefully weighted...a novel of beauty and faith' * Joseph O'Connor, Irish Times *
'Any new work by this master of moral complexity is a matter for rejoicing. He looks into the heart of the human condition with a piercing intelligence that few can match' * David Robson, Sunday Telegraph *
'A subtle examination of heroism... the elegance and economy of this novel are dazzling...This clever, compelling novel asks some uncomfortable questions' * Penelope Lively, Guardian *
'A poignant and touching novel...wonderfully written' * Angela Cooke, Daily Express *
'Both an absorbing wartime thriller and a thoroughly convincing study of grief * Sunday Times *

GOR000723435
The Widow and her Hero by Thomas Keneally
Thomas Keneally
Used - Very Good
Paperback
Hodder & Stoughton General Division
2008-01-24
272
0340825286
9780340825280
N/A
Book picture is for illustrative purposes only, actual binding, cover or edition may vary.
This is a used book - there is no escaping the fact it has been read by someone else and it will show signs of wear and previous use. Overall we expect it to be in very good condition, but if you are not entirely satisfied please get in touch with us.