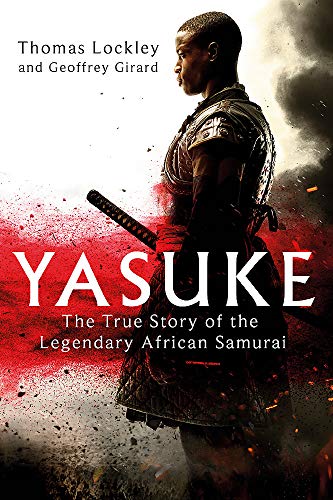 Out of Stock
£9.99
A riveting story about one of history's most enigmatic warriors.
Very Good
Only 0 left

Yasuke: The true story of the legendary African Samurai by Thomas Lockley

The remarkable life of history's first foreign-born samurai, and his astonishing journey from Northeast Africa to the heights of Japanese society.

The man who came to be known as Yasuke arrived in Japan in the 16th century, an indentured mercenary arriving upon one of the Portuguese ships carrying a new language, a new religion and an introduction to the slave trade. Curiously tall, bald, massively built and black skinned, he was known as a steadfast bodyguard of immense strength and stature, and swiftly captured the interest, and thence the trust, of the most powerful family in all of Japan. Two years later, he vanished.

Yasuke is the story of a legend that still captures the imagination of people across the world. It brings to life a little known side of Japan - a gripping narrative about an extraordinary figure in a fascinating time and place.

Yasuke is so breathtaking and revelatory that one would be believe the story to be fiction if it weren't true! The in-depth research into this historical re-telling is vast, comprehensive and enlightening. The narrative style is as razor-sharp and captivating as a katana's blade, drawing in the reader and giving them a 'first-hand' account of [an] extraordinary life -- Chris Bradford, author of the Young Samurai series
A gripping tale of politics, war and religion that reads like an adventure story -- Dave Rear, author of A Less Boring History of the World
Lockley and Girard bring [Yasuke] and his world to life with incredible research and style. Yasuke may have lived in the 1500s, but he is a hero for our modern world -- Bret Witter, New York Times bestselling co-author of The Monuments Men
Yasuke gripped me from the opening sentence - a unique story of a unique man, and yet someone with whom we can all identify -- Jack Weatherford, author of Genghis Khan and the Making of the Modern World
[An] excellent work of Japanese history * Booklist *
Eminently readable . . . The solid scholarship on and imaginative treatment of Yasuke's life make this both a worthwhile and entertaining work * Publishers Weekly *
This book is not only the best account in English of Yasuke, the famous African samurai. It's also a delightful introduction to the vibrant and multicultural world of Asian maritime history. Written novelistically, with a light scholarly touch . . . Exciting and informative! * Tonio Andrade, author of The Gunpowder Age *
A rich portrait of a brutal age * Kirkus Reviews *

Thomas Lockley (Author)
Thomas Lockley is a lecturer at Nihon University College of Law in Tokyo where courses he's taught include the International History of Japan, Britain and Japan in History, and East Asia in Japanese History.

Geoffrey Girard (Author)
Geoffrey Girard has written a number of historical adventure non-fiction titles, and has previously been nominated for a Stoker award. He has an MA and an MFA in Creative Writing.

GOR010261042
Yasuke: The true story of the legendary African Samurai by Thomas Lockley
Thomas Lockley
Used - Very Good
Hardback
Little, Brown Book Group
2019-05-02
480
075157161X
9780751571615
N/A
Book picture is for illustrative purposes only, actual binding, cover or edition may vary.
This is a used book - there is no escaping the fact it has been read by someone else and it will show signs of wear and previous use. Overall we expect it to be in very good condition, but if you are not entirely satisfied please get in touch with us.