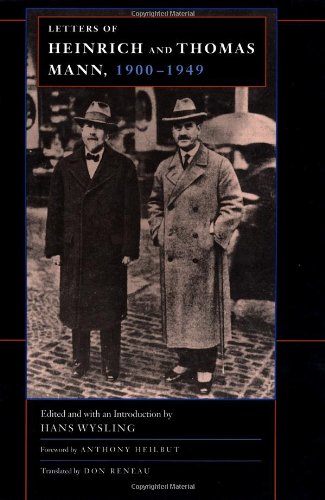 In Stock
£29.99
Beginning in Germany and Italy at the turn of the century, these letters document the views of Thomas and Heinrich Mann on aesthetics, politics and the social responsibility of the writer, as well as their mutual jealousy, admiration and rivalry. World War I caused a major rift between them.
Very Good
Only 1 left

Fortunately for us, brothers Heinrich and Thomas Mann remained devoted and eloquent correspondents even while disagreeing passionately on matters literary, political, philosophical, and personal. In their correspondence, set against a shifting backdrop of locations in Europe and America, mundane concerns blend easily with astonishing artistic and critical insights. That these irrepressible siblings were among the giants of twentieth-century letters gives their exchanges unique literary and historical fascination.

Beginning in Germany and Italy at the turn of the century, the letters document with disarming immediacy the brothers' views on aesthetics, politics, and the social responsibility of the writer, as well as their mutual jealousy, admiration, rivalry, and loyalty. The devastating rift caused by Thomas's support of Germany during World War I and his brother's utter opposition to the war took many years to mend, but they found their way back to friendship in the 1920s. After Hitler rose to power, both writers ultimately sought refuge in the United States. The letters offer a moving portrayal of their struggle, as novelists and socially engaged intellectuals, to bear witness to the cataclysmic historical changes around them and to their experience of exile, in Europe and then in America. This first complete English translation of their correspondence is a dramatic human dialogue and a major literary event.

Hans Wysling was Director of the Thomas Mann Archive at the Eidgenoessische Technische Hochschule in Zurich. Don Reneau is a freelance translator living in Connecticut. Anthony Heilbut is author of Thomas Mann: Eros and Literature (California paperback, 1997).

GOR002805711
Letters of Heinrich and Thomas Mann, 1900 1949 by Thomas Mann
Thomas Mann
Weimar & Now: German Cultural Criticism
Used - Very Good
Hardback
University of California Press
1998-03-18
462
0520072782
9780520072787
N/A
Book picture is for illustrative purposes only, actual binding, cover or edition may vary.
This is a used book - there is no escaping the fact it has been read by someone else and it will show signs of wear and previous use. Overall we expect it to be in very good condition, but if you are not entirely satisfied please get in touch with us.