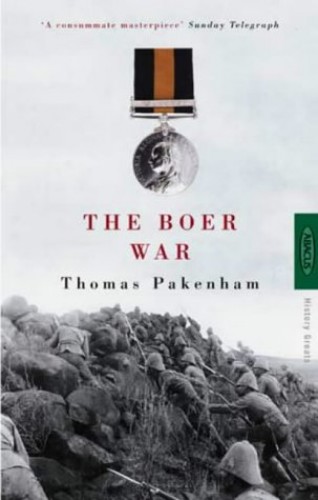 The Boer War
by Thomas Pakenham

The Boer War by Thomas Pakenham

Featuring previously unpublished sources, this 'enjoyable as well as massively impressive' bestseller is a definitive account of the Boer War (Financial Times)

The war declared by the Boers on 11 October 1899 gave the British, as Kipling said, 'no end of a lesson'. It proved to be the longest, the costliest, the bloodiest and the most humiliating campaign that Britain fought between 1815 and 1914.

Thomas Pakenham's narrative is based on first-hand and largely unpublished sources ranging from the private papers of the leading protagonists to the recollections of survivors from both sides. Mammoth in scope and scholarship, as vivid, fast-moving and breathtakingly compelling as the finest fiction. The Boer War is the definitive account of this extraordinary conflict - a war precipitated by greed and marked by almost inconceivable blundering and brutalities...and whose shattering repercussions can be felt to this very day.

'Not only a magnum opus, it is a conclusive work ... Enjoyable as well as massively impressive' -
Financial Times

'This is a wonderful book: brilliantly written ... the reader turns each page with increasing fascination and admiration' -A.J.P. Taylor

Hypnotically readable ... A tremendous feat of research ... this is grand-scale history with heroes and villains ... hot, impassioned work, and I recommend it wholeheartedly * Newsweek *
Not only a magnum opus, it is a conclusive work ... Enjoyable as well as massively impressive * Financial Times *
Thomas Pakenham, one of the auspiciously prolific Longfords (he is the brother of Antonia Fraser, above), has now given this epochal contest its first full-length treatment in nearly 70 years. In the course of his long narrative, he skillfully maps out the causes, the course and the aftereffects of the war. He examines the actions of the leading personalities on both sides, and carefully traces the transformation of the conflict into a war of attrition. Among the book's many strengths are Pakenham's use of unpublished and even some previously unconsulted sources (including some 52 veterans whom he interviewed); his vivid descriptions of military engagements and his attention to ways and means... An intelligent, vigorous, firmly grounded presentation--and, self-evidently, the new standard work. * Kirkus Reviews *

Thomas Pakenham is the author of The Mountains of Rasselas, The Year of Liberty, The Scramble for Africa, Meetings with Remarkable Trees and Remarkable Trees of the World. He divides his time between London and Ireland. He is married to the writer Valerie Pakenham and they have four children.

GOR001194941
The Boer War by Thomas Pakenham
Thomas Pakenham
Used - Very Good
Paperback
Little, Brown Book Group
1991-10-03
688
0349104662
9780349104669
N/A
Book picture is for illustrative purposes only, actual binding, cover or edition may vary.
This is a used book - there is no escaping the fact it has been read by someone else and it will show signs of wear and previous use. Overall we expect it to be in very good condition, but if you are not entirely satisfied please get in touch with us.