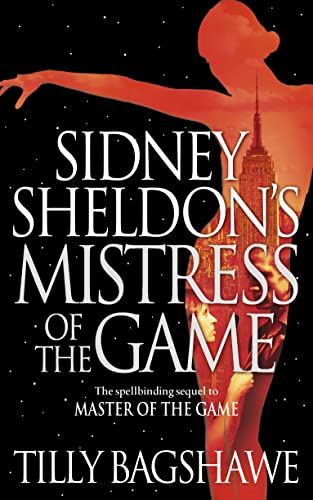 Sidney Sheldon's Mistress of the Game
by Tilly Bagshawe

The spellbinding sequel to Sidney Sheldon's MASTER OF THE GAME, one of the most glamorous and suspenseful tales ever told...

Sidney Sheldon's Mistress of the Game by Tilly Bagshawe

The spellbinding sequel to Sidney Sheldon's MASTER OF THE GAME, one of the most glamorous and suspenseful tales ever told...

It began with Jamie MacGregor, stealing diamonds in Africa. It continued with his daughter, the powerful Kate Blackwell, who grew her father's company into a world wide conglomerate. Now the story passes to the next generation.

Spanning the decades and picking up exactly where Sidney Sheldon's bestselling Master of the Game finished, Mistress of the Game follows the Blackwell family as they love, lose, scheme and murder through the 80s up until the present day.

Heart-stopping and glamorous, tense and provocative, Mistress of the Game is the sequel that Sheldon fans have been waiting for...

`A master storyteller at the top of his game.' USA Today

`Bagshawe's prose is as breathless as her plotting' Mirror

Tilly Bagshawe is the internationally bestselling author of three previous novels. A teenage single mother at 17, Tilly won a place at Cambridge University and took her baby daughter with her. She went on to enjoy a successful career in The City before becoming a writer. As a journalist, Tilly contributed regularly to the Sunday Times, Daily Mail and Evening Standard before following in the footsteps of her sister Louise and turning her hand to novels.
Tilly's first book, Adored, was a smash hit on both sides of the Atlantic and she hasn't looked back since. She is married to Robin Nydes, an American businessman and former investment banker, and the couple have two young sons as well as Tilly's daughter Sefi, who is now 18. The family divide their time between their homes in Kensington and Los Angeles and their beach house on Nantucket Island.

GOR001166716
Sidney Sheldon's Mistress of the Game by Tilly Bagshawe
Tilly Bagshawe
Used - Very Good
Paperback
HarperCollins Publishers
2009-08-06
528
0007304501
9780007304509
N/A
Book picture is for illustrative purposes only, actual binding, cover or edition may vary.
This is a used book - there is no escaping the fact it has been read by someone else and it will show signs of wear and previous use. Overall we expect it to be in very good condition, but if you are not entirely satisfied please get in touch with us.