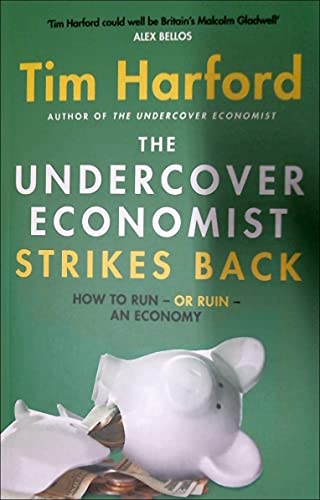 The Undercover Economist Strikes Back
by Tim Harford

In Stock
£5.49
Tim Harford returns as the Undercover Economist with an even bigger target in his sights: to explain how the whole world economy works.
Very Good Good
15 in stock

The Undercover Economist Strikes Back Summary

The Undercover Economist Strikes Back: How to Run or Ruin an Economy by Tim Harford

A million readers bought The Undercover Economist to get the lowdown on how economics works on a small scale, in our everyday lives. Since then, economics has become big news. Crises, austerity, riots, bonuses - all are in the headlines all the time. But how does this large-scale economic world really work? What would happen if we cancelled everyone's debt? How do you create a job? Will the BRIC countries take over the world? Asking - among many other things -- what the future holds for the Euro, why the banks are still paying record bonuses and where government borrowing will take us, in The Undercover Economist Strikes Back, Tim Harford returns with his trademark clarity and wit to explain what's really going on - and what it means for us all.

The Undercover Economist Strikes Back Reviews

Tim Harford is a brilliant explainer of economics . . . A superb guide, whatever your level of expertise -- William Leith * Evening Standard *
Tim Harford is a brilliant explainer of economics . . . beautifully clear . . . A superb guide -- William Leith * Scotsman *
Tim Harford is a riveting expositor of the field, lively and fair minded, and his books The Undercover Economist and its macroeconomic companion piece The Undercover Economist Strikes Back are excellent places to start, both because they are so interesting in themselves and also because they give a good initiation in how economists think and study these sorts of questions -- John Lanchester
Tim has a really exceptional talent for telling a simple and a very easily understood and yet still incredibly interesting story about economics -- Planet Money * The Indicator *
Every Tim Harford book is cause for celebration. He makes 'the dismal science' seem like an awful lot of fun -- Malcolm Gladwell
Our chief economic storyteller ... thanks to people such as Harford, the profession will gain a better informed audience * Independent *
Clear-thinking and easy to read ... he has mastered the art of dealing with this subject without the use of a single diagram or mathematical equation * Sunday Times *
Reading Harford is like finding yourself next to the funniest, smartest fellow at the party. It is such fun that readers will hardly notice that, by the end, they've mastered macroeconomics * Financial Times *
An excellent primer for me, a non-economist who wants to understand the financial crisis -- Simon Singh * Observer *

Tim Harford is a senior columnist for the Financial Times and the presenter of Radio 4's More or Less. He was the winner of the Bastiat Prize for economic journalism in 2006, and More or Less was commended for excellence in journalism by the Royal Statistical Society in 2010, 2011 and 2012. Harford lives in Oxford with his wife and three children, and is a visiting fellow at Nuffield College, Oxford. His other books include The Undercover Economist, The Logic of Life and Adapt.

GOR005995341
The Undercover Economist Strikes Back: How to Run or Ruin an Economy by Tim Harford
Tim Harford
Used - Very Good
Paperback
Little, Brown Book Group
2014-07-03
320
0349138931
9780349138930
N/A
Book picture is for illustrative purposes only, actual binding, cover or edition may vary.
This is a used book - there is no escaping the fact it has been read by someone else and it will show signs of wear and previous use. Overall we expect it to be in very good condition, but if you are not entirely satisfied please get in touch with us.