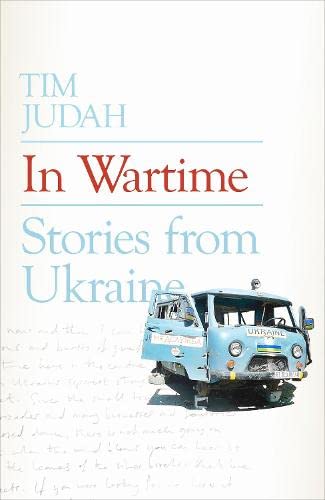 In Wartime
by Tim Judah

In Stock
£18.99
An account of the human side of the conflict in Ukraine which is an evocative exploration of what the second largest country in Europe feels like in wartime. It is a picture of a nation trapped between powerful forces, both political and historical.
Very Good
Only 1 left

In Wartime: Stories from Ukraine by Tim Judah

Urgent and insightful, Tim Judah's account of the human side of the conflict in Ukraine is an evocative exploration of what the second largest country in Europe feels like in wartime. Making his way from the Polish border in the west, through the capital city and the heart of the 2014 revolution, to the eastern frontline near the Russian border, seasoned war reporter Tim Judah brings a rare glimpse of the reality behind the headlines. Along the way he talks to the people living through the conflict - mothers, soldiers, businessmen, poets, politicians - whose memories of a contested past shape their attitudes, allegiances and hopes for the future. Together, their stories paint a vivid picture of a nation trapped between powerful forces, both political and historical. 'Visceral, gripping, heartbreaking' Simon Sebag Montefiore

Haunting . . . timely . . . Judah concentrates skilfully and affectingly on the human cost of manoeuvres in Ukraine. He seldom makes his own thoughts and opinions seem intrusive, instead letting his eloquent and compassionate subjects give a far greater insight into the horror and privations -- Alexander Larman * Observer *
Tim Judah has got a lot closer to the war in eastern Ukraine than most western reporters - close enough to be able to convey vividly to readers the smells and sounds . . . His experience of the Balkan Wars of the 1990s helped Judah spot this war as it mutated from malignant propaganda into blood-spattered reality. As a reporter, he excels at letting the Ukrainians themselves do the talking. -- Niall Ferguson
The strength of Judah's In Wartime lies in the depth, range and balance of his reportage and his eye for telling details. -- Tony Barber * Financial Times *
Tim Judah . . . does not tell us what to think about war but instead teaches us how: with courage, humility, attention to human detail, and admirable historical intuition. -- Timothy Snyder
Visceral, gripping, heart-breaking and often shocking, based on interviews with witnesses and victims on the ground, In Wartime is both astute political analysis and vivid war reportage of what's really happening in the dirty war in Ukraine by a veteran observer of the Balkan wars who truly understands the complexities and nuances -- Simon Sebag Montefiore
A compelling and acute piece of contemporary reportage -- David Edgar * London Review of Books *
Judah has carved out a reputation as one of Europe's best writers on the Balkans. His job description should be something like History Wars Correspondent . . . comes close to the master, Ryszard Kapuscinski -- Roger Boyes * Times *
Vibrant . . . the multitude of ordinary voices makes for a chorus of discontent and hope. -- Serhy Yekelchyk * Times Literary Supplement *
A kaleidoscopic portrait . . . Judah Looks at the present - what Ukraine looks and feels like now. He criss-crosses the country from the Russian-speaking east to the Ukrainian-speaking west. -- Marcus Tanner * Independent *
A timely account . . . a vivid human portrait -- Annabelle Chapman * Prospect *

Tim Judah has reported on the war in Ukraine for the New York Review of Books and for the Economist, where he is also Balkans correspondent. During his career as a journalist, he has covered many countries and conflicts including the aftermath of communism in Eastern Europe, the Balkan Wars, Afghanistan, Iraq, North Korea, Darfur, Haiti and Uganda. He is the author of Kosovo: War and Revenge The Serbs: History, Myth and the Destruction of Yugoslavia and Bikila: Ethiopia's Barefoot Olympian.

GOR007256083
In Wartime: Stories from Ukraine by Tim Judah
Tim Judah
Used - Very Good
Hardback
Penguin Books Ltd
2015-12-01
288
0241198828
9780241198827
N/A
Book picture is for illustrative purposes only, actual binding, cover or edition may vary.
This is a used book - there is no escaping the fact it has been read by someone else and it will show signs of wear and previous use. Overall we expect it to be in very good condition, but if you are not entirely satisfied please get in touch with us.