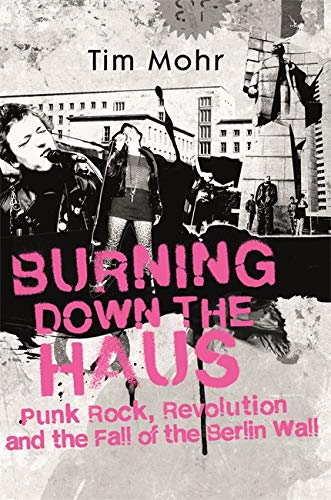 Burning Down The Haus by Tim Mohr

An extraordinary history of the punk movement in East Germany, perfectly timed for the thirtieth anniversary of the fall of the Berlin Wall on 3 October 2019.

Burning Down The Haus: Punk Rock, Revolution and the Fall of the Berlin Wall by Tim Mohr

LONGLISTED FOR THE CARNEGIE MEDAL FOR EXCELLENCE

'Wildly entertaining . . . A joy in the way it brings back punk's fury and high stakes' Vogue

THE SECRET HISTORY OF PUNKS IN EAST GERMANY

It began with a handful of East Berlin teens who heard the Sex Pistols on a British military radio broadcast to troops in West Berlin, and it ended with the collapse of the East German dictatorship. Punk rock was a life-changing discovery: in an authoritarian state where the future was preordained, punk, with its rejection of society and DIY approach to building a new one, planted the seeds for revolution.

As these kids began to form bands, they also became more visible, and security forces - including the dreaded secret police, the Stasi - targeted them. They were spied on by friends and family; they were expelled from schools and fired from jobs; they were beaten by police and imprisoned. But instead of conforming, the punks fought back, playing an indispensable role in the underground movement that helped bring down the Berlin Wall.

Rollicking, cinematic and thrillingly topical, this secret history brings to life the young men and women who successfully fought authoritarianism three chords at a time. Burning Down the Haus is a fiery testament to the irrepressible spirit of revolution.

Wildly entertaining . . . A thrilling tale . . . A joy in the way it brings back punk's fury and high stakes * Vogue *
Original and inspiring . . . Mohr has written an important work of Cold War cultural history * Wall Street Journal *
A thrilling and essential social history that details the rebellious youth movement that helped change the world * Rolling Stone *
[A] riveting and inspiring history of punk's hard-fought struggle in East Germany. The book chronicles, with cinematic detail, the commitment and defiance required of East German punks as they were forced to navigate constant police harassment and repression * New York Times Book Review *
Gripping * Billboard *
Burning Down the Haus fastidiously traces the self-discovery of punks in the socialist dictatorship of East Germany, and the violence and repression they endured on the way to freedom * NPR *
Mohr digs into the subject of East German punk like nobody before * Rolling Stone (Germany) *
Spellbinding . . . Part cultural history, part political thriller, and entirely true -- Peter Ames Carlin, author of Homeward Bound: The Life of Paul Simon
Burning Down the Haus is a riveting cultural history that also serves as a rallying call against authoritarianism everywhere -- Ruth Franklin, author of the NBCC Award-winning Shirley Jackson: A Rather Haunted Life
Burning Down the Haus is not just an immersion into the punk rock scene of East Berlin, it's the story of the cultural and political battles that have shaped the world we live in today. Tim Mohr delivers the soundtrack for the revolution that we've all been waiting for -- DW Gibson, author of The Edge Becomes the Centre: An Oral History of Gentrification in the Twenty-First Century
In East Germany, where non-conformity meant jail time, punks' ripped clothes and spiked hair were a show of courage and defiance. Squatting in derelict apartments and burning their lyrics before the secret police could get hold of them, these teenagers wrote the soundtrack for a rebellion that helped bring down the Berlin Wall. Tim Mohr tells the story of their DIY revolution with the thoroughness of a historian and the panache of a cultural insider. Burning Down the Haus is a riveting cultural history that also serves as a rallying call against authoritarianism everywhere * Ruth Franklin, author of the NBCC Award-winning Shirley Jackson: A Rather Haunted Life *
Lively . . . Compelling . . . A front-row seat to the events of the '80s. This take on punk evolution is engaging, enlightening and well worth checking out * Publishers Weekly *
A wonderful book * Berliner Zeitung *
Offers a captivating punk's-eye view of everyday life as the DDR unravelled in its final years . . . Both a moving story of indefatigable defiance in the face of oppression and a complex portrait of everyday life in the DDR in the 1980s, Burning Down the Haus honours the punk spirit with its history from below * Times Literary Supplement *
Political regimes can't stop soundwaves. They just travel. This is revealed powerfully in Tim Mohr's Burning Down the Haus, an exploration of how punk changed Berlin, and still defines it today, 30 years after the Wall fell * New Statesman *
Tim Mohr has co-written best-selling memoirs by Duff McKagan of Guns 'n' Roses, Paul Stanley of KISS, and Gil Scott-Heron. He is also an award-winning translator of German novels, including Why We Took the Car and Sand by Wolfgang Herrndorf, Wetlands by Charlotte Roche and The Hottest Dishes of the Tartary Cuisine by Alina Bronsky. While a staff editor at Playboy magazine, he worked with Hunter S. Thompson and Matt Taibbi, among others. His writing has appeared in many publications, including the New York Times Book Review, Inked and Daily Beast. Prior to starting his writing career, Tim spent the 1990s as a DJ in Berlin.
GOR010304680
9780349701318
0349701318
Burning Down The Haus: Punk Rock, Revolution and the Fall of the Berlin Wall by Tim Mohr
Tim Mohr
Used - Very Good
Hardback
Little, Brown Book Group
2019-09-26
384
N/A
Book picture is for illustrative purposes only, actual binding, cover or edition may vary.
This is a used book - there is no escaping the fact it has been read by someone else and it will show signs of wear and previous use. Overall we expect it to be in very good condition, but if you are not entirely satisfied please get in touch with us
Trustpilot