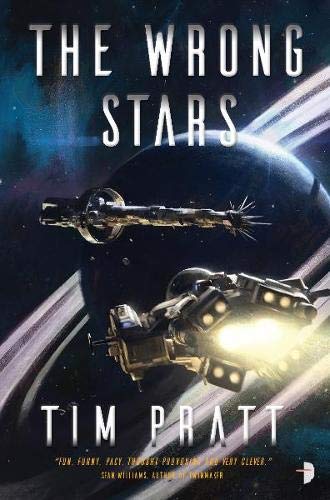 The Wrong Stars
by Tim Pratt

In Stock
£6.99
A ragtag crew of humans and posthumans discover alien technology that could change the fate of humanity... or awaken an ancient evil and destroy all life in the galaxy in this Philip K Dick Award-finalist space opera.
Well Read
Only 1 left

The Wrong Stars: Book One of the Axiom series by Tim Pratt

The shady crew of the White Raven run freight and salvage at the fringes of our solar system. They discover the wreck of a centuries-old exploration vessel floating light years away from its intended destination and revive its sole occupant, who wakes with news of First Alien Contact. When the crew break it to her that humanity has alien allies already, she reveals that these are very different extra-terrestrials... and the gifts they bestowed on her could kill all humanity, or take it out to the most distant stars. File Under: Science Fiction [ Adrift | Liar Liar | Golden Spiders | Bridge the Void ]

"Fun, funny, pacy, thought-provoking and very clever space opera - a breath of fresh air."
"Ridiculously fun with a well-thought-out space opera setting and lots of fancy reveals, and most of all a nice romance between two women who are there for each other when the alien brain spiders start swarming."
"Pratt's worldbuilding fascinates, and the plot serves up action and big ideas in equally tasty helpings. This is definitely a series to watch."
"I don't use the word "rollicking" often, but it applies here."

TIM PRATT is a Hugo Award-winning SF and fantasy author, who has also been a finalist for World Fantasy, Sturgeon, Stoker, Mythopoeic, and Nebula Awards, among others. Since 2001 he has worked for Locus, the magazine of the science fiction and fantasy field, where he currently serves as senior editor. He lives in Berkeley, California, with his wife and son.

GOR009960141
The Wrong Stars: Book One of the Axiom series by Tim Pratt
Tim Pratt
The Axiom
Used - Well Read
Paperback
Watkins Media
2017-11-02
400
0857667084
9780857667083
N/A
Book picture is for illustrative purposes only, actual binding, cover or edition may vary.
This is a used book - there is no escaping the fact it has been read by someone else and it will show signs of wear and previous use. Overall we expect it to be in very good condition, but if you are not entirely satisfied please get in touch with us.