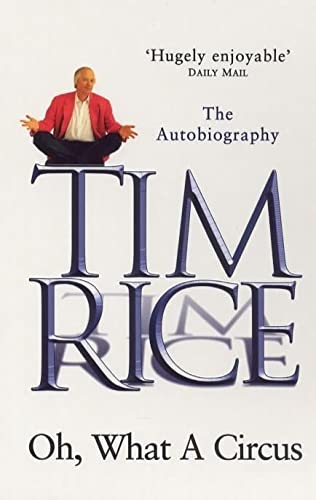 Oh, What A Circus
by Tim Rice

In Stock
£14.99
The hugely entertaining autobiography of one of the world's best lyricists, which covers the period of his three epoch-making musicals, Jesus Christ Superstar, Evita and Joseph and the Amazing Technicolour Dreamcoat.
Very Good Good Well Read
Only 3 left

Oh, What A Circus Summary

Oh, What A Circus by Tim Rice

With wit and candour, Tim Rice describes the gilded path that took him from cricket and comic-obsessed schoolboy to one of the world's best-known lyricists. Along the way he worked as a petrol pump attendant and articled clerk before becoming a management trainee at EMI. But it was his fateful meeting with Andrew Lloyd Webber in 1965 which was to be the turning-point in Tim's career. Immediate fortune didn't follow and it took the album of Jesus Christ Superstar to reach no.1 in the States before they were taken seriously. Covering every aspect of his life until his marriage to Jane McIntosh and the opening of the stage production of Evita, this is an engaging and fascinating autobiography.

Oh, What A Circus Reviews

His style is edgy and elegant, and makes for a memorable read * The Sunday Times *
Thoroughly engaging read by a thoroughly likeable chap * Lynn Barber, Daily Telegraph *
In ... Fascinating detail ... Rice describes the conception and birth pangs of ... Joseph And The Amazing Technicolor Dreamcoat, Jesus Christ Superstar and Evita * Mail on Sunday *
Honest, engaging and witty * What's On In London *
An incredible and unique story * Midweek *
Tim has winning charm and wit * Sunday Herald - Glasgow *
Funny, revealing and entertaining. It's Rice on Rice, proving yet again how good he is at making stories come alive * Birmingham Post *

Sir Tim Rice was educated at St Albans and Lancing College. His partnership with Andrew Lloyd Webber produced three successful musicals (as above). Later musicals include Chess and Blondel. He has received three Oscars for his lyrics for Disney's Aladdin, The Lion King and for the song 'You Must Have Me' from Evita. He was knighted in 1994.

GOR001205092
Oh, What A Circus by Tim Rice
Tim Rice
Used - Very Good
Paperback
Hodder & Stoughton General Division
2000-04-07
464
0340654597
9780340654590
N/A
Book picture is for illustrative purposes only, actual binding, cover or edition may vary.
This is a used book - there is no escaping the fact it has been read by someone else and it will show signs of wear and previous use. Overall we expect it to be in very good condition, but if you are not entirely satisfied please get in touch with us.