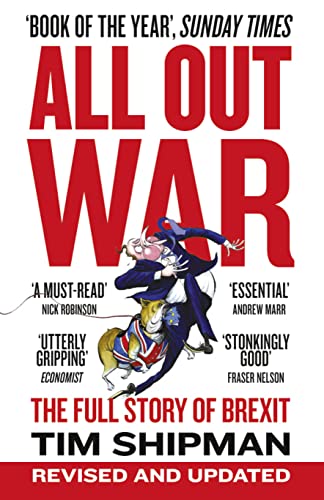 All Out War
by Tim Shipman

In Stock
£5.49
SHORTLISTED FOR THE ORWELL PRIZE 2017 'The best political book of the year' Andrew Marr 'A superb work of storytelling and reporting. Sets new benchmark for the writing of contemporary political history' Andrew Sparrow, Guardian The only book to tell the full story of how and why Britain voted to leave the EU.
Very Good Good
43 in stock

All Out War Summary

All Out War: The Full Story of How Brexit Sank Britain's Political Class by Tim Shipman

SHORTLISTED FOR THE ORWELL PRIZE 2017

`The best political book of the year' Andrew Marr

`A superb work of storytelling and reporting. Sets new benchmark for the writing of contemporary political history' Guardian

The only book to tell the full story of how and why Britain voted to leave the EU.

This is the acclaimed inside story of the EU referendum in 2016 that takes you behind the scenes of the most extraordinary episode in British politics since the Second World War.

With unparalleled access to all key players, this is a story of calculation, attempted coups and people torn between principles and loyalty. It is a book about our leaders and their closest aides, the decisions they make, how and why they make them and how they feel when they turn out to be so wrong.

In All Out War, Tim Shipman has written a political history that reads like a thriller, exploring how and why David Cameron chose to take the biggest political gamble of his life, and why he lost.

All Out War Reviews

`I can't imagine a more even-handed or better sourced, all points-of-view account of the biggest story in British politics since WWII ... A fine book' ANDREW MARR, Sunday Times

`Shipman is brilliantly qualified to write the inside story of the referendum, with his unrivalled access to all the players' JOHN RENTOUL

`One of the best political journalists of his era ... It's impossible to fully comprehend what happened on June 23 and the ensuing two weeks without reading this book ... Brilliant' IAIN DALE, LBC

`Shipman's book is by far the best. It is a detailed, often pitch-perfect account that delivers the tale with an infectious sense of human drama - no mean feat, given the task of completing the whole thing so quickly' JOHN HARRIS, New Statesman

`The essential account ... Shipman has spoken to every key individual to produce the definitive first draft of history, a comprehensive yet impartial study of how Brexit won' Financial Times

`Stonkingly good: if you're vaguely interested in politics buy it. It won't be bettered' FRASER NELSON

`Thorough, comprehensive and utterly gripping. It is hard to imagine a better first draft of history' Economist

`Undoubtedly the British political book of the year' ALEX MASSIE

`Shipman, one of the most brilliant, best informed and well-connected journalists in Westminster, has written a superlative book which does full justice to a momentous time' PETER OBORNE

`Don't think any of the quotes do justice to quite how good it is. A superb work of reporting and storytelling, and sets new benchmark for the writing of contemporary political history' ANDREW SPARROW

Tim Shipman has been a national newspaper journalist for sixteen years and has a wealth of experience reporting on British and American politics and international relations.
Currently the Political Editor of the Sunday Times, Tim has covered four British General Elections and three American elections from the US. Well known in the Westminster political mix, he is a trusted confidant of politicians from all political parties and has a growing following as a witty observer of the political scene @ShippersUnbound.

GOR008340170
All Out War: The Full Story of How Brexit Sank Britain's Political Class by Tim Shipman
Tim Shipman
Used - Very Good
Paperback
HarperCollins Publishers
2017-06-01
688
0008215170
9780008215170
Short-listed for Orwell Prize 2017
Book picture is for illustrative purposes only, actual binding, cover or edition may vary.
This is a used book - there is no escaping the fact it has been read by someone else and it will show signs of wear and previous use. Overall we expect it to be in very good condition, but if you are not entirely satisfied please get in touch with us.