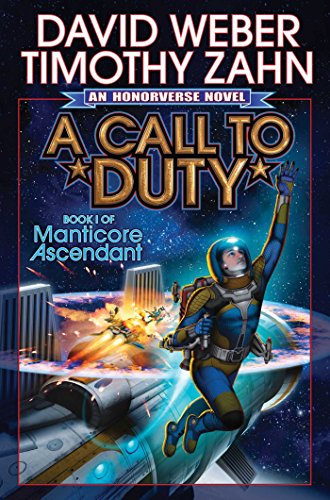 Call to Duty
by TIMOTHY ZAHN

Call to Duty by TIMOTHY ZAHN

With over eight million copies of his books in print and twenty-nine titles on the New York Times bestseller list, David Weber is the science fiction publishing phenomenon of the new millennium. In the hugely popular Honor Harrington series, the spirit of C.S. Forester's Horatio Hornblower and Patrick O'Brian's Master and Commander lives on--into the galactic future. Books in the Honor Harrington and Honoverse series have appeared on twenty-one bestseller lists, including those of The Wall Street Journal, The New York Times, and USA Today. While Weber is best known for his spirited, modern-minded space operas, he is also the creator of the Oath of Swords fantasy series and the Dahak saga, a science fiction and fantasy hybrid. Weber is has also engaged in a steady stream of best-selling collaborations including his Starfire Series with Steve White, which produced the New York Times bestseller The Shiva Option among others. Weber's collaboration with alternate history master Eric Flint led to the bestselling 1634: The Baltic War. His Honorverse collaborations with Flint in the Crown of Slave series are also popular, with latest entry, Cauldron of Ghosts, a New York Times bestseller. His planetary adventure novels with military science fiction ace and multiple national best-selling author John Ringo includes the March to the Stars and We Few. Finally, Weber's teaming with Linda Evans and Joelle Presby produced the Multiverse series, including latest entry, The Road to Hell. David Weber makes his home in South Carolina with his wife and children.

Timothy Zahn is a Hugo award winner, and author of the #1 New York Times best seller Heir to the Empire. Born in Chicago, Zahn earned a B.S. in physics from Michigan State University and an M.S. in physics from the University of Illinois. He sold his first story to Analog magazine in 1978, and immediately attracted attention as a new writer of science fiction based on real, cutting-edge science. Other Zahn creations include the Conqueror and Dragonback series. His books for Baen include his popular Cobra SF adventure series and now the Manticore Ascendant series, cowritten with David Weber. The Timothy Zahn author page on Facebook has received over 50,000 likes and can be visited at http: //www.facebook.com/TimothyZahn.

GOR010043760
Call to Duty by TIMOTHY ZAHN
TIMOTHY ZAHN
Used - Very Good
Paperback
Baen Books
2016-06-28
528
1476781680
9781476781686
N/A
Book picture is for illustrative purposes only, actual binding, cover or edition may vary.
This is a used book - there is no escaping the fact it has been read by someone else and it will show signs of wear and previous use. Overall we expect it to be in very good condition, but if you are not entirely satisfied please get in touch with us.