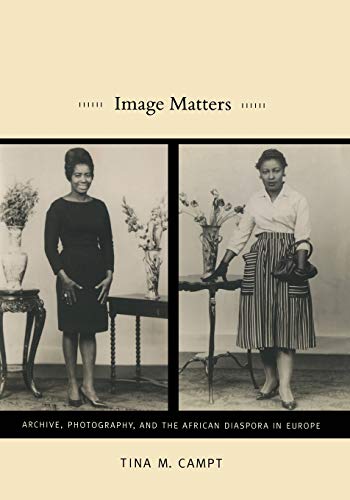 Looks at photograph collections of four Black German families taken between 1900 and the end of World War II and a set of portraits of Afro-Caribbean migrants to Britain taken at a photographic studio in Birmingham between 1948 and 1960.

In Image Matters, Tina M. Campt traces the emergence of a black European subject by examining how specific black European communities used family photography to create forms of identification and community. At the heart of Campt's study are two photographic archives, one composed primarily of snapshots of black German families taken between 1900 and 1945, and the other assembled from studio portraits of West Indian migrants to Birmingham, England, taken between 1948 and 1960. Campt shows how these photographs conveyed profound aspirations to forms of national and cultural belonging. In the process, she engages a host of contemporary issues, including the recoverability of non-stereotypical life stories of black people, especially in Europe, and their impact on our understanding of difference within diaspora; the relevance and theoretical approachability of domestic, vernacular photography; and the relationship between affect and photography. Campt places special emphasis on the tactile and sonic registers of family photographs, and she uses them to read the complexity of "race" in visual signs and to highlight the inseparability of gender and sexuality from any analysis of race and class. Image Matters is an extraordinary reflection on what vernacular photography enabled black Europeans to say about themselves and their communities.
"Campt offers a compelling study of how 'engaging the photograph as a dynamic and contested site of black cultural formation' and belonging leads to insights about representation extending well beyond substantive particularities. In prose readily accessible to undergraduates, she adapts current theories concerning the intentionality of photography, "image-making as a collective and relational practice of enunciation," and "haptic visualities" to case studies of black German and British identity formation.... Recommended." - A.F. Roberts, CHOICE Magazine
"Image Matters is a valuable addition to the body of knowledge on diaspora
and transnationalism. The work also provides significance to the field of visual rhetoric and may prove indispensable to other similar studies. Furthermore, given the nature of the images and the stellar research this work can be effectively incorporated into the realm of psychology and sociology. At the very least, Campt upholds the idea that a picture is worth a thousand words and effectively challenges us to seek a deeper meaning of the photographs we view." - Mary Vanderlinden, Ethnic and Racial Studies
"Campt, by merely presenting unseen images of these African people, accomplishes much. She also proves that the African Diaspora that we all know from history books and discussion isn't as streamlined as we thought. Image Matters presents a complex story on race, gender and image control of a people who haven't controlled their image in a long time." - Stephon Johnson, New York Amsterdam News
"In Image Matters Tina Campt explores a visual nexus of black European subjectivities through an innovative interrogation of vernacular photography. This volume is a beautifully detailed account of Campt's investigation, one that gracefully unfolds its unexpectedly private moments, moving public provocations, and at times chilling accounts of our perpetually returning historical legacies. Campt has gathered a stunning array of photographs. . . ." - Vera Ingrid Grant, CAA Reviews
"In this lucid and meticulously argued book, Tina M. Campt questions the way we see and understand race by examining family photographs of black Europeans. Her detailed readings of studio portraits, snapshots, and orphaned images engage the multiple sensory registers on which images solicit and touch us. In our encounters with these photographs of belonging, displacement, and exclusion, we are reminded why images matter."-Saidiya Hartman, author of Lose Your Mother: A Journey along the Atlantic Slave Route
"None of the riveting photographs in Image Matters are what they first seem. As Tina M. Campt's analysis unfolds, the images of black diasporic communities in Europe are revealed to be infinitely complex. They complicate accepted narratives and link to larger questions about the nature of historical evidence and the historical process. Ultimately, they become a prism for thinking about the diasporic condition itself, drawing attention to the diversity of black experience and to the ways that diaspora involves not only movement but also staying put."-Elizabeth Edwards, author of The Camera as Historian: Amateur Photographers and Historical Imagination, 1885-1918
"Image Matters is an extraordinary reflection on what vernacular photography enabled black Europeans to say about themselves and their communities. . . . I have family photos throughout my home, but after reading Image Matters, this thought provoking book, I will never look at them the same. They now seem to take on a life of their own beyond just images. This is a book that I highly recommend, especially from a scholarly perspective." -- Dennis Moore * EUR/Electronic Urban Report *
"Image Matters offers historians (and other people) a fascinating and thought-provoking set of case studies and guide to productive ways of reading photographs, as well as to thinking about our own response to them." -- Eve Rosenhaft * German History *
"Image Matters is highly engaging, and Campt's employment of multiple methodologies is adroit and interesting. . . . The book is an important addition to Africana / Afro-Caribbean Studies and Cultural and Media Studies. More precisely, Campt makes a critical scholarly contribution to how we conceive of the African Diaspora." -- Nicosia Shakes * Callaloo *
"Tina Campt's recent monograph achieves an authorial tone both deeply personable and strikingly engaging for the intellect. Her research contributes to the emerging field of black European studies through an interdisciplinary engagement with the intersecting discourses of photography, diaspora, and race. . . . Campt has produced a work of scholarship daringly subjective and intellectually provocative." -- Angelica Fenner * Journal of Family History *

Tina M. Campt is Director of the Africana Studies Program and Professor of Africana and Women's, Gender and Sexuality Studies at Barnard College, Columbia University. She is the author of Other Germans: Black Germans and the Politics of Race, Gender, and Memory in the Third Reich.