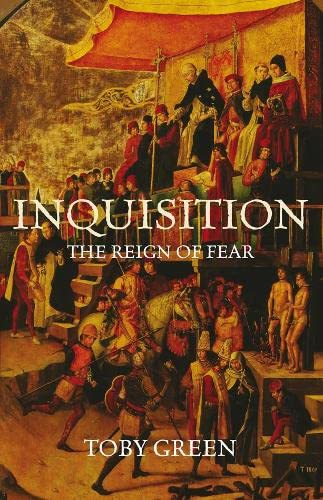 Inquisition: The Reign of Fear by Toby Green

Everybody has heard of the Inquisition. It was an institution that pursued heretics, philandering priests and sexual deviants in Europe, Africa, Asia and Latin America for a period of over 350 years, changing its focus with the times and enduring stubbornly into the nineteenth century. Today the word implies dread, fear and a withheld threat of torture. But who were its targets? Why did it provoke such fear? How and where did it operate? Why was it founded, and why did it last for so long?

Toby Green's incredible new book brings an extraordinary 350-year period vividly to life by focusing on the hitherto untold stories of individuals from all walks of life. Because the Inquisition touched every aspect of society, it changed the world: people attending church had to look suitably devout, or they might be denounced; a curse at a game of cards, thrown out in the heat of the moment, could bring an investigation; stripping fat from a leg of lamb was enough to excite accusations of being a Jew. A secret police and a thought police, the Inquisition produced a permanent state of fear.

This history, though filled with stories of terror and the unspeakable ways in which human beings can treat one another, is also one of hope and ultimately of the resilience of the human spirit. Instead of being cowed by their fear, countless people rebelled in small and big ways, paving the way for a more inclusive society.

The story of the Inquisition is not, then, one to be hidden and avoided; it deserves to be told in all its human richness and complexity.

Toby Green is the author of three previous books and his work has been translated into six languages. He has travelled widely in Africa and Latin America, and now lives with his wife and daughter in the West Country.

GOR001153157
Inquisition: The Reign of Fear by Toby Green
Toby Green
Used - Very Good
Paperback
Pan Macmillan
2008-02-01
496
0330443356
9780330443357
N/A
Book picture is for illustrative purposes only, actual binding, cover or edition may vary.
This is a used book - there is no escaping the fact it has been read by someone else and it will show signs of wear and previous use. Overall we expect it to be in very good condition, but if you are not entirely satisfied please get in touch with us.