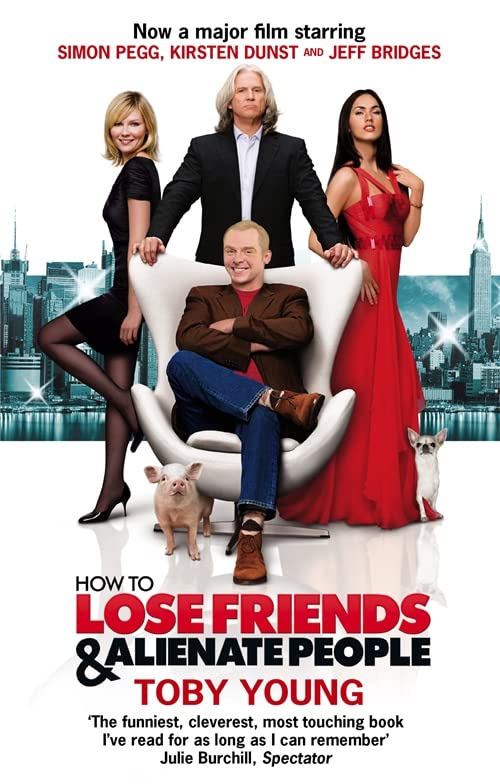 How To Lose Friends & Alienate People
by Toby Young

In Stock
£4.49
* An Englishman in New York - by a man who survived to tell the tale
Very Good Good
6 in stock

How To Lose Friends & Alienate People by Toby Young

In 1995, high-flying British journalist Toby Young left London for New York to become a contributing editor at Vanity Fair. Other Brits had taken Manhattan - Alistair Cooke, Tina Brown, Anna Wintour - so why couldn't he? Surely, it would only be a matter of time before the Big Apple was in the palm of his hand.
But things did not go according to plan. Within the space of two years he was fired from Vanity Fair, banned from the most fashionable bar in the city and couldn't get a date for love or money. Even the local AA group wanted nothing to do with him.
How To Lose Friends & Alienate People is Toby Young's hilarious account of the five years he spent steadily working his way down the New York food chain, from glossy magazine editor to crash-test dummy for interactive sex toys. But it's not just a collection of self-deprecating anecdotes. It's also a seditious attack on the culture of celebrity from inside the belly of the beast. Not since Bonfire of the Vanities has the New York A-list been so mercilessly lampooned - and it all really happened!

I'll rot in hell before I give that little bastard a quote for his book * Julie BURCHILL *
This man, Toby Young, is a rat and a snake and, to hear some tell it, also a raccoon. He deserves all these nasty blurbs * Dave Eggers, author of A HEARTBREAKING WORK of STAGGERING GENIUS. *
In How to Lose Friends and Alienate People, Toby Young--columnist and former co-editor (with Julie Burchill and Cosmo Landesman) of The Modern Review--portrays himself as a man pulled to the New York media set by twin desires: to trade one-liners with modern day Dorothy Parkers and Robert Benchleys over very dry martinis, and to drink Cristal from a supermodel's cleavage in the back of a limo. In the event, neither is fulfilled and desire shows itself up to be the snake that eats its own tail--endless and ultimately encircling a big fat zero. * How to Lose... is Young's own telling of his disastrous five-year career in New York journalism, initiated when he is offered a job at Vanity Fair, Conde Nast's flagship star-fest. Young may have been hired for his snappy prose, but his real genius turns *
Fiona Buckland, AMAZON.CO.UK REVIEW

Toby Young was born in 1963. In the course of his career as a journalist he's been fired from a succession of prestigious newspapers and magazines, including The Times, The Guardian, The Independent and Vanity Fair. He lives in Shepherd's Bush.

GOR000934269
How To Lose Friends & Alienate People by Toby Young
Toby Young
Used - Very Good
Paperback
Little, Brown Book Group
2008-09-18
368
0349121400
9780349121406
N/A
Book picture is for illustrative purposes only, actual binding, cover or edition may vary.
This is a used book - there is no escaping the fact it has been read by someone else and it will show signs of wear and previous use. Overall we expect it to be in very good condition, but if you are not entirely satisfied please get in touch with us.