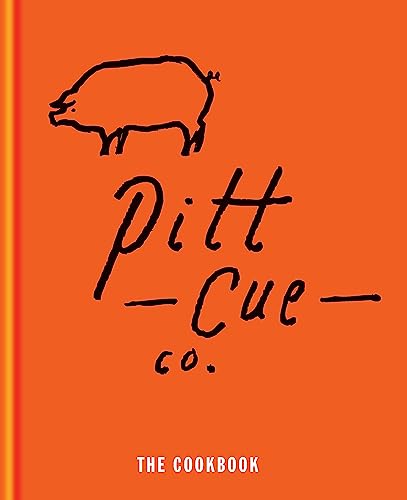 In Stock
£11.99
The coolest BBQ cookbook and the tastiest meat dishes from "the hottest place to eat right now" - Independent
Very Good
Only 1 left

With great recipes for meats, sauces and rubs mixed with ideas for pickles, slaws, puddings and cocktails, plus features on meats, equipment and methods, the Pitt Cue Co. Cookbook is your guide to enjoying the best hot, smoky, sticky, spicy grub all year round.

This is an urban British hipster's take on a solid bit of Americana, tucked away on a tidy London street. But it's executed with commitment, wit and serious attention to detail. And a lot of pig. -- Jay Rayner * The Observer *
The hottest place to eat right now * The Independent *
Pitt Cue Co. is worth the queue... if you want to pig out on some proper barbecue food, this is the place to do it * TimeOut *
It's a glutton's paradise * Evening Standard *
I am obsessed by new Pitt Cue Co. book. A brilliant barbeque tome -- Tom Parker Bowles
Just got the Pitt Cue Co. Cookbook. It's so bloody brilliant I want to cry. -- Gizzi Erskine

In summer 2011, Pitt Cue Co. was the talking point of London's Southbank. For three months, their trailer dished out hot, Southern US-style, slow-cooked food and instantly became a must-try experience. In January 2012, the trailer was joined by a destination restaurant in Soho, and since then there have been queues around the block.

April Bloomfield - who wrote the foreword - has spent most of her life in the kitchen. Her NYC restaurants The Spotted Pig and The Breslin Bar & Dining Room have each been awarded a Michelin star, and her latest - The John Dory Oyster Bar - has received rave reviews. April's first book, A Girl and Her Pig, was published in 2012.

GOR005034081
Pitt Cue Co. - The Cookbook by Tom Adams
Tom Adams
Used - Very Good
Hardback
Octopus Publishing Group
2013-06-03
288
1845337565
9781845337568
N/A
Book picture is for illustrative purposes only, actual binding, cover or edition may vary.
This is a used book - there is no escaping the fact it has been read by someone else and it will show signs of wear and previous use. Overall we expect it to be in very good condition, but if you are not entirely satisfied please get in touch with us.