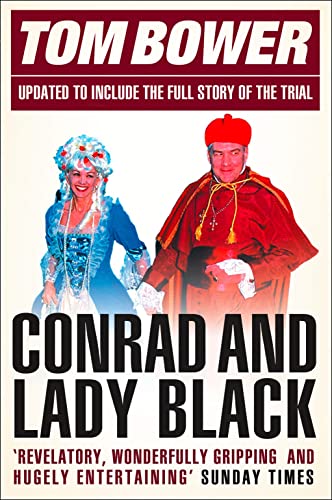 The riveting tale of how the wanabee aristo Conrad Black and his social-mountaineering wife Barbara gulled their way into the City, the Tory party, Wall Street and High Society. This new paperback edition will be fully updated to include details of Black's high-profile trial for corporate fraud, sure to claim international attention.

Conrad and Lady Black: Dancing on the Edge by Tom Bower

The riveting tale of how the wanabee aristo Conrad Black and his social-mountaineering wife Barbara gulled their way into the City, the Tory party, Wall Street and High Society. This new paperback edition will be fully updated to include details of Black's high-profile trial for corporate fraud, sure to claim international attention.

The rise and fall of the media tycoon Conrad Black is rivalled in its spectacular extravagance only by the machinations of his social-mountaineering wife, Barbara Amiel. Together their story of overweening ambition and greed is a modern-day classic of hubris.

There is no bolder or better-informed chronicler of the follies of the rich and powerful than Tom Bower. Fearless in the approach which has brought him accolades for his gripping exposes of Robert Maxwell, Tiny Rowland, Mohammed Fayed and Richard Branson, Bower reveals how the Blacks financed a billionaire's lifestyle and won friends and influence in London and New York.

Born into considerable wealth in Canada, Conrad Black bought and sold (but never effectively managed) several businesses, from mining and tractors to broadcasting companies and newspapers. In 1985 he bought the Telegraph group in London, where very little was known of the controversy over his past financial dealings.

In 1992 he married Barbara Amiel, who later famously said, `I have an extravagance that knows no bounds'. Besotted with his wife, he began living way beyond his means. Fabulous parties, jewellery, clothes, private jets and homes followed. In 2003 an independent report in America accused him of `outright fraud', `ethical corruption' and `corporate kleptocracy' - allegations that he will vigorously deny at his trial in Chicago in 2007. This edition will be updated to include the full story of the trial in all its sensational detail.

Tom Bower's book, based on over 150 interviews with bankers, politicians, celebrities, power-brokers and close friends, is packed with intimate revelations. It is a hugely entertaining account of gullibility in high places.

`A wonderfully gripping and hilarious book...meticulously researched and written in clear and uncluttered prose devoid of hyperbole...hugely entertaining and revelatory.' Sunday Times

`A unique and valuable force in the British Press: an investigative reporter who sinks into crooks and charlatans...a relentlessly damning account.' Nicholas Shakespeare, Daily Telegraph

Tom Bower has a distinguished reputation as an investigative historian, broadcaster and journalist and is the author of several ground-breaking books about tycoons. His most recent works are `Conrad and Lady Black', `The Squeeze' and his biographies of Simon Cowell and Bernie Ecclestone. Among his other much-debated biographies are those of Mohammed Fayed, Richard Branson and Robert Maxwell.

GOR001132245
Conrad and Lady Black: Dancing on the Edge by Tom Bower
Tom Bower
Used - Very Good
Paperback
HarperCollins Publishers
2007-10-09
448
0007247168
9780007247165
N/A
Book picture is for illustrative purposes only, actual binding, cover or edition may vary.
This is a used book - there is no escaping the fact it has been read by someone else and it will show signs of wear and previous use. Overall we expect it to be in very good condition, but if you are not entirely satisfied please get in touch with us.