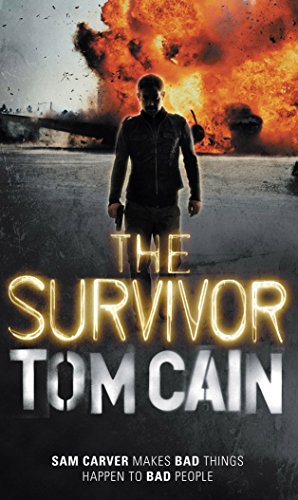 The Survivor
by Tom Cain

In Stock
£4.49
Samuel Carver makes bad accidents happen to worse people. And one of Carver's targets has got away. He was beaten and tortured and left to die, but Samuel Carver is a hard man to kill.Carver's hunt will take him deep into the heart of a conspiracy in which the lives of millions are at stake.
Very Good
7 in stock

The Survivor by Tom Cain

Samuel Carver makes bad accidents happen to worse people. He's very good at his job. But nobody's perfect. And one of Carver's targets has got away. Now the world faces a new age of conflict driven by religious fanaticism. In Russia, the government have admitted they no longer know the whereabouts of one hundred small-scale 'suitcase nukes'. In Afghanistan and Kosovo, ruthless terrorists plot the downfall of their hated enemies. In Texas, a dying billionaire plots his own personal Armageddon. And Carver can do nothing to stop them. He was beaten and tortured and left to die, but Samuel Carver is a hard man to kill. When he awakes in a Swiss sanatorium from weeks of torment, he discovers that the woman he loves has vanished. Somehow he must find the strength to track her down. Carver's hunt will take him deep into the heart of a conspiracy in which the lives of millions are at stake. He must confront an agonizing choice between his duty and his heart, and face the ultimate sacrifice. As the clock ticks down to doomsday, who will survive the final, explosive conflagration? In The Survivor the worlds of fact and fiction collide in a thriller that grips from the first page to the last.

"Jason Bourne meets From Russia With Love. If you like breakneck pace, glamorous settings, a never-say-die hero, and the stakes bursting with end-of-world consequences, this one is for you" -- Andrew Gross
"Samuel Carver is a classic flawed hero to match all the greats... and we want more of him!" * crimesquad.com *
"Tense, terse and fraught with anxiety, The Survivor makes you zip through the pages as if your life depended upon reaching the conclusion before your heart gives out" * shotsmag.co.uk *
"Another stunner... The pace of the narrative and the twists of the storyline make for compulsive and vastly entertaining reading" -- Wilbur Smith
"Irresistible. Smart and fast paced, with everything you want from an international spy thriller" -- Chelsea Cain, author of Heartsick

Tom Cain is the pseudonym for an award-winning journalist, with twenty-five years experience working for Fleet Street newspapers. He is the author of The Accident Man.

GOR000493062
The Survivor by Tom Cain
Tom Cain
Used - Very Good
Paperback
Transworld Publishers Ltd
2009-01-01
544
0552155535
9780552155533
N/A
Book picture is for illustrative purposes only, actual binding, cover or edition may vary.
This is a used book - there is no escaping the fact it has been read by someone else and it will show signs of wear and previous use. Overall we expect it to be in very good condition, but if you are not entirely satisfied please get in touch with us.