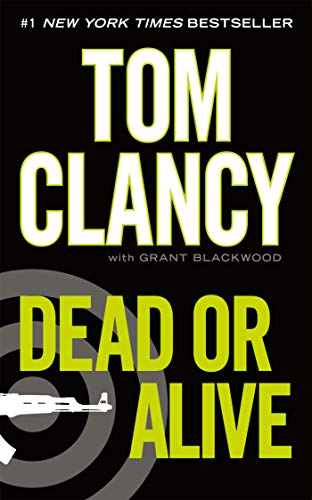 Dead or Alive
by Tom Clancy

In Stock
£2.99
Jack Ryan, Jr. and his Campus colleagues John Clark and Ding Chavez go after a vicious terrorist mastermind, the Emir, and they will bring him inNdead or alive.
Very Good Well Read
Only 3 left

Dead or Alive by Tom Clancy

Tom Clancy delivers a #1 New York Times bestselling Jack Ryan novel that will remind readers why he is the acknowledged master of international intrigue and nonstop military action.

It is The Campus. Secretly created under the administration of President Jack Ryan, its sole purpose is to eliminate terrorists and those who protect them. Officially, it has no connection to the American government--a necessity in a time when those in power consider themselves above such arcane ideals as loyalty, justice, and right or wrong.

Now covert intelligence expert Jack Ryan Jr. and his compatriots at The Campus--joined by black ops warriors John Clark and "Ding" Chavez--have come up against their greatest foe: a sadistic killer known as the Emir. Mastermind of countless horrific attacks, the Emir has eluded capture by every law enforcement agency in the world. But his greatest devastation is yet to be unleashed as he plans a monumental strike at the heart of America.

On the trail of the Emir, Jack Ryan Jr. will find himself following in his legendary father's footsteps on a manhunt that will take him and his allies across the globe, into the shadowy arenas of political gamesmanship, and back onto U.S. soil in a race to prevent the possible fall of the West....

Praise for Dead or Alive

"The best characters from all of Clancy's previous novels are on the case....For fans of the genre, Dead or Alive is likely to provide a long weekend's pleasure."--Los Angeles Times

"Clancy is back at the top of his game...In-depth research, continuous suspense, and scores of fascinating characters."--Publishers Weekly (starred review)

"He constantly taps the current world situation for its imminent dangers and spins them into an engrossing tale."--The New York Times Book Review

"No one can equal his talent for making military electronics and engineering intelligible and exciting...He remains the best!"--Houston Chronicle

A little more than thirty years ago Tom Clancy was a Maryland insurance broker with a passion for naval history. Years before, he had been an English major at Baltimore's Loyola College and had always dreamed of writing a novel. His first effort, The Hunt for Red October--the first of the phenomenally successful Jack Ryan novels--sold briskly as a result of rave reviews, then catapulted onto the New York Times bestseller list after President Reagan pronounced it "the perfect yarn." From that day forward, Clancy established himself as an undisputed master at blending exceptional realism and authenticity, intricate plotting, and razor-sharp suspense. He passed away in October 2013.

Grant Blackwood, a U.S. Navy veteran, spent three years aboard a guided missile frigate as operations specialist and pilot rescue swimmer. He is coauthor, with Clive Cussler, of the New York Times bestsellers Spartan Gold and Lost Empire. He is also the author of the Briggs Tanner series--The End of Enemies, The Wall of Night, and An Echo of War. He lives in Colorado.

GOR005038566
Dead or Alive by Tom Clancy
Tom Clancy
Jack Ryan Novel
Used - Very Good
Paperback
Unknown
0
0425263533
9780425263532
N/A
Book picture is for illustrative purposes only, actual binding, cover or edition may vary.
This is a used book - there is no escaping the fact it has been read by someone else and it will show signs of wear and previous use. Overall we expect it to be in very good condition, but if you are not entirely satisfied please get in touch with us.