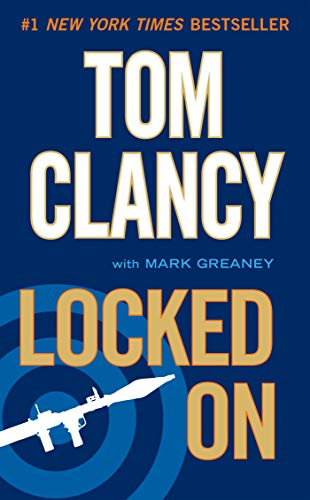 Locked on
by Tom Clancy

In Stock
£6.49
Coming out of retirement to run for president, Jack Ryan finds himself in the middle of a high-stakes attack from his opponent as his close comrade, John Clark, is the subject of treacherous charges, at the same time Jack Ryan, Jr. and other members of Campus struggle to stop terrorists.
Very Good Good Well Read
Only 4 left

Locked on by Tom Clancy

Jack Ryan Jr.--along with the covert warriors of the Campus--continues to uphold his legendary father's legacy of courage and honor in this thriller from #1 New York Times bestselling author Tom Clancy.

Privately training with special forces, he's honing his combat skills to continue his work within the Campus, hunting down and eliminating terrorists wherever he can--even as Jack Ryan Sr. campaigns to become President of the United States again.

But what neither father nor son knows is that the political and personal have just become equally dangerous. A devout enemy of Jack Sr. launches a privately-funded vendetta to discredit him and connect him to a mysterious killing in his longtime ally John Clark's past. All they have to do is catch him.

With Clark on the run, it's up to Jack Jr. to stop a growing threat emerging in the Middle East, where a corrupt Pakistani general has entered into a deadly pact with a fanatical terrorist to procure four nuclear warheads they can use to blackmail any world power into submission--or face annihilation.

Praise for Locked On

"Clancy's at top of his game."--Chicago Tribune

"A winner...The novel's premises are all too plausible--which is what makes Locked On so exciting...Hard to put down"--Pittsburgh Post-Gazette

"He constantly taps the current world situation for its imminent dangers and spins them into an engrossing tale."--The New York Times Book Review

"No one can equal his talent for making military electronics and engineering intelligible and exciting...He remains the best!"--Houston Chronicle

A little more than thirty years ago Tom Clancy was a Maryland insurance broker with a passion for naval history. Years before, he had been an English major at Baltimore's Loyola College and had always dreamed of writing a novel. His first effort, The Hunt for Red October--the first of the phenomenally successful Jack Ryan novels--sold briskly as a result of rave reviews, then catapulted onto the New York Times bestseller list after President Reagan pronounced it "the perfect yarn." From that day forward, Clancy established himself as an undisputed master at blending exceptional realism and authenticity, intricate plotting, and razor-sharp suspense. He passed away in October 2013.

Mark Greaney has a degree in international relations and political science. In his research for the Gray Man novels, including Mission Critical, Agent in Place, Gunmetal Gray, Back Blast, Dead Eye, Ballistic, On Target, and The Gray Man, he traveled to more than fifteen countries and trained alongside military and law enforcement in the use of firearms, battlefield medicine, and close-range combative tactics. He is also the author of the New York Times bestsellers Tom Clancy Support and Defend, Tom Clancy Full Force and Effect, Tom Clancy Commander in Chief, and Tom Clancy True Faith and Allegiance. With Tom Clancy, he coauthored Locked On, Threat Vector, and Command Authority.

GOR004702821
Locked on by Tom Clancy
Tom Clancy
Jack Ryan Novel
Used - Very Good
Paperback
Unknown
0
0425248607
9780425248607
N/A
Book picture is for illustrative purposes only, actual binding, cover or edition may vary.
This is a used book - there is no escaping the fact it has been read by someone else and it will show signs of wear and previous use. Overall we expect it to be in very good condition, but if you are not entirely satisfied please get in touch with us.