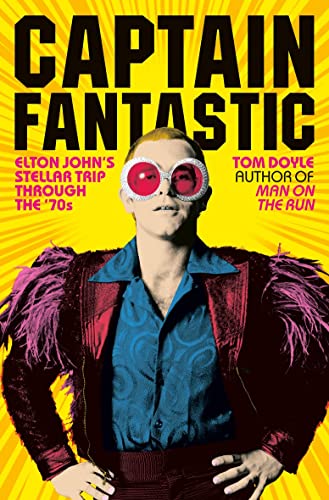 The first book to trace Elton John's meteoric rise in the wild 1970s, to a global sensation with sales of 200 million albums worldwide

In August 1970 Elton John achieved overnight fame after a rousing performance at the Troubadour in Los Angeles; over the next five years he was unstoppable, scoring seven consecutive number 1 albums and sixteen Top 10 singles in America. But behind his outre image and comedy glasses lay a desperately shy individual, conflicted about his success, his sexuality, and his narcotic indulgences. In 1975, at the apex of his fame, John attempted suicide twice yet, after announcing his retirement in 1977 at the age of thirty as well as coming out as a gay man, he gradually found his way back to music.

Captain Fantastic is an intimate look at the rise, fall and rise again of John's fame-and-drug fuelled decade, with a final section bringing his life up to the present.

'In this adoring and candid set of fan's notes, music journalist Doyle (Man on the Run) draws on interviews with John and his colleagues, especially his writing partner, Bernie Taupin, to capture the meteoric rise and fall of the man who released at least one album every year of the 1970s . . . This energetic book . . . makes a convincing case that John reached his peak and made his best music in the '70s'

'A breezy and surprisingly poignant romp through a decade, and a career, that effectively invented modern celebrity culture'

-- Peter Doggett, author of You Never Give Me Your Money: The Beatles After the Breakup

'a warm, insightful study, with Elton emerging as flawed but loveable, brilliant but infuriating; a suburban pop music fan who couldn't quite believe he became a bigger star than many of his heroes'

`a warm, pacey canter through the first decade of Elton's career'

'A riveting account of the lad from Pinner's head-spinning ascension to rock royalty in the decade of excess. While clearly fond of the music Elton made during this insanely prolific imperial phase, Doyle offers perceptive criticism where it's due. This is no hagiography. Self-critical Reg will presumably recognise the flawed, likeable neurotic depicted herein'

`An entertaining biography...Doyle handles Elton's early life and remarkable rise to stardom with a light touch and an obvious command of the subject matter'

'Veteran rock journalist [Tom] Doyle continues his foray into the 1970s music scene with a compelling profile of an unlikely rock star. . . . In chronicling Elton John's stratospheric rise to fame, replete with platinum records, increasingly outlandish stage shows, and mountains of cash, the author deftly manages to keep his subject in sharp focus. Based on hours of one-on-one interviews with Captain Fantastic himself, this breezy yet comprehensive biography demonstrates what it was like for the talented musician to churn out an impossible string of hit records . . . A great way to better understand the man behind the garish glasses and platform boots'

Tom Doyle is an acclaimed music journalist, author and long-standing contributing editor to Q, whose work has also appeared in Mojo, the Guardian, Marie Claire, Elle, The Times and Sound on Sound. Over the years he has been responsible for key magazine-cover profiles of Paul McCartney, Keith Richards, Kate Bush, Elton John, R.E.M. and U2, among many others.

GOR008391372
9781846973741
1846973740
Captain Fantastic: Elton John's Stellar Trip Through the '70s by Tom Doyle
Tom Doyle
Used - Very Good
Hardback
Birlinn General
2017-03-17
256
N/A
Book picture is for illustrative purposes only, actual binding, cover or edition may vary.
This is a used book - there is no escaping the fact it has been read by someone else and it will show signs of wear and previous use. Overall we expect it to be in very good condition, but if you are not entirely satisfied please get in touch with us
Trustpilot