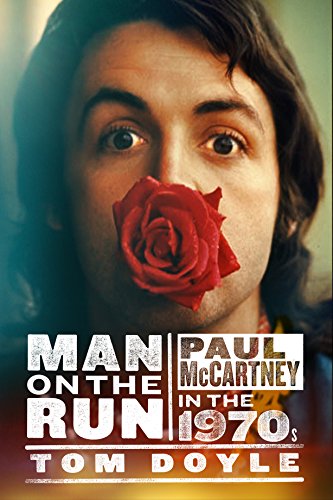 Man on the Run by Tom Doyle

'Man on the Run' paints an illuminating picture: from McCartney's nervous breakdown following the Beatles' split through his apparent victimisation by the authorities to the rude awakening of his imprisonment for marijuana possession in Japan in 1980 and the shocking wake-up call of John Lennon's murder.

Man on the Run: Paul McCartney in the 1970s by Tom Doyle

The most famous living rock musician on the planet, Paul McCartney is now regarded as a slightly cosy figure, an (inter)national treasure. Back in the 1970s, however, McCartney cut a very different figure. He was, literally, a man on the run. Desperately trying to escape the shadow of the Beatles, he became an outlaw hippy millionaire, hiding out on his Scottish farmhouse in Kintyre before travelling the world with makeshift bands and barefoot children. It was a time of numerous drug busts and brilliant, banned and occasionally baffling records. For McCartney, it was an edgy, liberating and sometimes frightening period of his life that has largely been forgotten. Man on the Run paints an illuminating picture: from McCartney's nervous breakdown following the Beatles' split through his apparent victimisation by the authorities to the rude awakening of his imprisonment for marijuana possession in Japan in 1980 and the shocking wake-up call of John Lennon's murder. Ultimately, it poses the question: if you were one quarter of the Beatles, could you really outrun your past?

'Man On The Run: Paul McCartney in the 1970s is lovingly researched and expertly written by someone who was not afraid to push the boundaries in order to get to the untouched juicy bits. This isn't just a factual list of already documented events, this is an accessible and reader friendly must-have book written from an honest and open perspective that makes McCartney's already extensively documented life seem fresh and new'

'Starting with the painful disintegration of the Beatles, Doyle examines the next decade in McCartney's unimaginably odd existence, from his post-hippy farm idyll with wife Linda to the turbulent highs and lows of Wings ... most compelling is the book's portrait of a man in a position that doesn't come with a guidebook, playing it by ear. ****'

'The go-to guy if you want to coax confessions from a superstar, Doyle writes without agenda'

'Doyle's writing is as beautiful as any McCartney tune'

'[Doyle] manages to say something new about a public figure about whom countless thousands of books and articles have been written, and he says it well... McCartney emerges as more admirable than many readers might have imagined - and more human, too'

'Tom Doyle's detailed chronicle, which includes rare interviews with McCartney and former Wings members, portrays a band that was far more contentious than eager-to-please hits like 1976's 'Let 'Em In' had us believe, fronted by a legend who wanted to be both boss and buddy. The book is larded with tales of Seventies rock-star excess, Paul and Linda's love of weed, docked paychecks, and grousing musicians'

'Well-researched but still breezy and engaging, the book offers a comprehensive tour of the shaggy, bleary-eyed decade when the hardest-working ex-Beatle reached the zenith of his creative and commercial success... Man on the Run makes an excellent contribution to the burgeoning literature devoted to McCartney's post-Beatles career'

'In the 1970s, a depressed, heavy-drinking Paul McCartney walked away from the Beatles and reinvented himself as the leader of another hitmaking rock 'n' roll band. A new book by longtime Q magazine contributing editor Tom Doyle about that turbulent period in the legendary rock star's life, Man on the Run, catches him in mid-flight'

'[An] excellent and insightful biography ... he manages to get to the heart of McCartney's dilemma ... a fascinating read'

Tom Doyle is an acclaimed music journalist, author and long-standing contributing editor to Q, whose work has also appeared in Mojo, the Guardian, Marie Claire, Elle, The Times and Sound on Sound. Over the years he has been responsible for key magazine-cover profiles of Paul McCartney, Keith Richards, Kate Bush, Elton John, R.E.M. and U2, amongst many others. He is the author of 'The Glamour Chase: The Maverick Life of Billy MacKenzie' (Bloomsbury 1998, Polygon 2011) which has attained the status of a classic rock biography since its original publication. 'Doyle makes sense of a stoned shaggy dog story that has none of the narrative neatness of the Beatles' rise and fall' - Guardian

GOR005231352
9781846972393
1846972396
Man on the Run: Paul McCartney in the 1970s by Tom Doyle
Tom Doyle
Used - Very Good
Hardback
Birlinn General
2013-09-05
304
N/A
Book picture is for illustrative purposes only, actual binding, cover or edition may vary.
This is a used book - there is no escaping the fact it has been read by someone else and it will show signs of wear and previous use. Overall we expect it to be in very good condition, but if you are not entirely satisfied please get in touch with us
Trustpilot