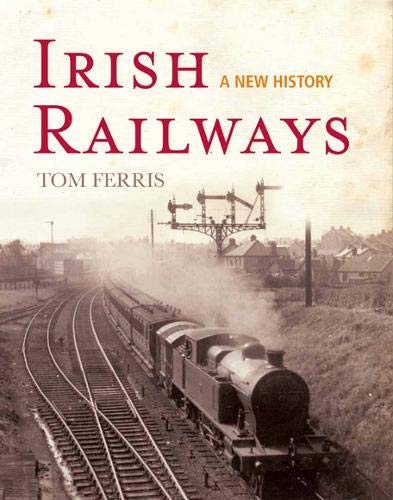 Tom Ferris's critically acclaimed book provides many insights into the social and economic effects of the railways. This is a story rich in human interest, a tale of triumph and tragedy, superb achievement and monumental incompetence, which will appeal to all who have even a passing interest in this most romantic of human inventions.

It is now over 170 years since the first passenger railway in Ireland, the Dublin & Kingstown, opened for business in 1834. From modest beginnings, the railway network expanded over the next 70 years into almost every part of the country. At its greatest extent, the national network consisted of just under 3,500 route miles of track.

This era of expansion was followed by an equally long period of decline which was sparked by the inexorable rise of the internal combustion engine and exacerbated by the partition of the island and the economic problems of the interwar years. It was only towards the end of the twentieth century that this decline was arrested and passenger numbers and investment levels at last began to recover.

This new book, written by one of the leading historians of Ireland's railways, provides not just a detailed account of the rise and decline of the system and its current resurgence, but many insights into the social and economic effects of the railways on the country they served. The author shows how these effects were both beneficial and detrimental. The railways allowed the products of the great manufactories of Victorian Britain to be distributed cheaply to the remotest corners of Ireland causing difficulties for local producers, and eventually forcing the Irish economy to depend even more on agriculture as a result.

On the more positive side of the equation, they encouraged social and economic mobility and had an effect in binding the country together by allowing the distribution of national newspapers, enabling sporting contests such as Gaelic games and horse racing to move from the local to the national stage and encouraged political debate and agitation with prominent figures using the trains to take their message to a wider audience than was hitherto possible. The railways even became embroiled to some extent in the political process, as government sponsored railway promotion at the end of the nineteenth century attempted to promote economic regeneration and perhaps even kill off enthusiasm for Home Rule in the process.

This is a story rich in human interest, a tale of triumph and tragedy, superb achievement and monumental incompetence, which will appeal to all who have even a passing interest in this most emotive and romantic of human inventions in the field of transport.

Tom Ferris is an author and publisher. Originally from County Tyrone, he now lives in England. He holds a Masters degree in railway history, is one of the leading authorities on Irish railways and the author of many previous books and film scripts on the subject.

GOR002821471
Irish Railways: A New History by Tom Ferris
Tom Ferris
Used - Very Good
Hardback
Gill
2008-10-10
256
0717142914
9780717142910
N/A
Book picture is for illustrative purposes only, actual binding, cover or edition may vary.
This is a used book - there is no escaping the fact it has been read by someone else and it will show signs of wear and previous use. Overall we expect it to be in very good condition, but if you are not entirely satisfied please get in touch with us.