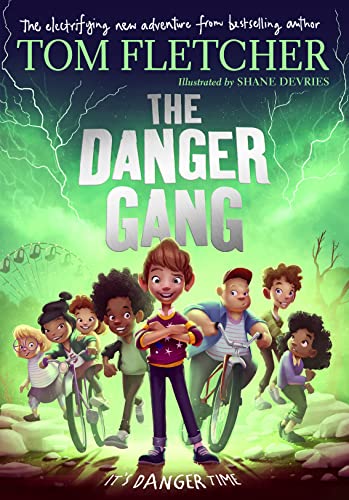 The Danger Gang
by Tom Fletcher

The Danger Gang by Tom Fletcher

The electrifying No.1 bestselling adventure from the author of The Christmasaurus and The Creakers, Tom Fletcher!

Franky can't wait to move to his new town - although he wishes he didn't have to leave his best friend Dani behind.

But everything changes after the storm, when strange green lightning and powerful thunder crash down on the town. From that night on, the kids who live on Franky's street start to change. One by one, they become a little odd. A little unusual. A little... magical.

Franky's always wanted to be part of an amazing gang - just like his hero, super-spy Zack Danger! And soon, he realises that there's real danger in store for himself and his new friends.

And so the Danger Gang is born..

Stonkingly good . . . a compelling adventure and a nuanced celebration of friendship and family love * Guardian *

Tom Fletcher is a number one bestseller and one of the UK's most popular children's authors. The Christmasaurus was the biggest debut middle-grade novel of 2016 and was shortlisted for a British Book Award, since then Tom has published several more chart-topping children's novels including The Creakers, The Christmasaurus and the Winter Witch and the instant number one bestseller The Danger Gang. Tom also writes the incredibly successful Who's in Your Book? picture book series, and is one half of the author duo behind the Dinosaur that Pooped picture book series too, which has sold over 1.5 million copies. For older readers, Tom co-authors the Eve of Man series with his wife Giovanna Fletcher. Tom's books have been translated into thirty-three languages and to date he has sold over 2.5 million copies of his books in the UK alone. He is also a music-making, song-writing, guitar-playing, Guinness World Record-holding, nappy changing, galaxy-defending dad!