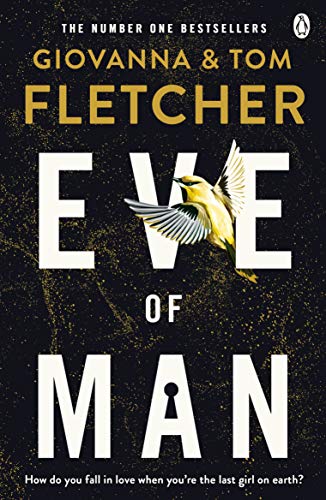 Eve of Man
by Tom Fletcher

Eve of Man by Tom Fletcher

Fans of The Hunger Games, Divergent and The Handmaid's Tale will love this electrifying dystopian love story.

Against all odds, she survived. The first girl born in fifty years.

They called her Eve.

Eve lives alone in the Tower under the strict gaze of the Mothers. She is prized and protected, because she is the last girl on earth.

Eve has always understood that the survival of the human race is in her hands. Now she's sixteen, and three males have been selected. Eve knows it's time to face her fate.

Until she meets Bram.

Eve sees a chance for something she never thought could be hers.

But how do you choose between love and the future of humanity?

'One of the big books of the year. You'd be a fool to miss it' Heat

'A compelling read' Mail on Sunday

Set in a dystopian future that has seen no girls born for 50 years . . . This promises to be one of the big books of the year. You'd be a fool to miss it * Heat *
Their first joint book, Eve is forced to decide between love and the fate of humanity * OK! *
Eve holds the fate of the human race in her hands . . . This chilling dystopia is at heart a love story, and the vivid characterisation has you rooting for the duo from page one -- CHILDREN'S BOOK OF THE MONTH * The Mail on Sunday *
A Hunger Games-esque novel . . . a compelling read * The Mail on Sunday *
Casts a wide web of intrigue, deception, and hope. A heady page-turner and an enthralling start to a trilogy * Kirkus Reviews *
Praise for Giovanna: * - *
A fun read with a big dose of girl power * Sun *
Praise for Tom: * - *
Genius * Sun *

Tom and Giovanna Fletcher are two of the UK's most successful authors. Tom is the creator of The Christmasaurus, which was the biggest debut middle-grade novel of 2016, while Giovanna's novel, Some Kind of Wonderful, was a number four Sunday Times hardback bestseller in 2017. Their books have sold over 1.5 million copies and been translated into more than 30 languages. Their social media platforms have a combined following of almost 6 million subscribers. Tom and Giovanna married in 2012 and are parents to three boys, Buzz, Buddy and Max.

They are both exceptional writing talents and Eve of Man is their first novel as a writing duo.

GOR009658892
Eve of Man by Tom Fletcher
Tom Fletcher
Eve of Man Trilogy
Used - Very Good
Paperback
Penguin Books Ltd
2019-01-24
432
0718184122
9780718184124
N/A
Book picture is for illustrative purposes only, actual binding, cover or edition may vary.
This is a used book - there is no escaping the fact it has been read by someone else and it will show signs of wear and previous use. Overall we expect it to be in very good condition, but if you are not entirely satisfied please get in touch with us.