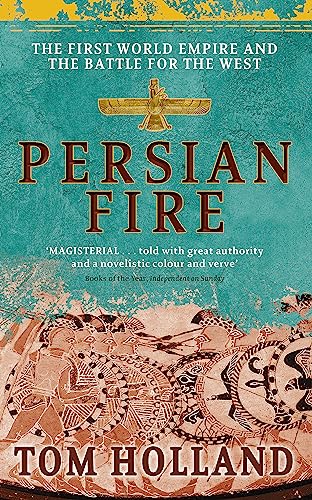 In Stock
£5.49
A brilliant new account of the world's very first clash of civilisations between the Persians and the Greeks in 480BC.
Very Good Good Well Read
27 in stock

Persian Fire: The First World Empire, Battle for the West by Tom Holland

In 480 BC, Xerxes, the King of Persia, led an invasion of mainland Greece. Its success should have been a formality. For seventy years, victory - rapid, spectacular victory - had seemed the birthright of the Persian Empire. In the space of a single generation, they had swept across the Near East, shattering ancient kingdoms, storming famous cities, putting together an empire which stretched from India to the shores of the Aegean. As a result of those conquests, Xerxes ruled as the most powerful man on the planet. Yet somehow, astonishingly, against the largest expeditionary force ever assembled, the Greeks of the mainland managed to hold out. The Persians were turned back. Greece remained free. Had the Greeks been defeated at Salamis, not only would the West have lost its first struggle for independence and survival, but it is unlikely that there would ever have been such and entity as the West at all.
Tom Holland's brilliant new book describes the very first 'clash of Empires' between East and West. Once again he has found extraordinary parallels between the ancient world and our own. There is no competing popular book describing these events.

Gripping and authoritative ... An awe-inspiring story of the struggle for freedom * Express *
Confident, fluent and accessible, and with salutary lessons for our own times, this is history at its best * The Times *

Tom Holland is an award-winning historian, author and broadcaster. He is the author of Rubicon: The Triumph and the Tragedy of the Roman Republic, which won the Hessell-Tiltman Prize for History and was shortlisted for the Samuel Johnson Prize; Persian Fire, his history of the Graeco-Persian wars, won the Anglo-Hellenic League's Runciman Award in 2006; Millennium: The End of the World and the Forging of Christendom, a panoramic account of the two centuries on either side of the apocalyptic year 1000; In the Shadow of the Sword, which covers the collapse of Roman and Persian power in the Near East, and the emergence of Islam; and Dynasty, a portrait of Rome's first imperial dynasty. He has adapted Homer, Herodotus, Thucydides and Virgil for the BBC. His translation of Herodotus was published in 2013 by Penguin Classics and followed in 2016 by a history of AEthelstan published under the Penguin Monarchs series, and in 2019 AEthelflaed England's Forgotten Founder as a Ladybird Expert Book. In 2007, he was the winner of the Classical Association prize, awarded to 'the individual who has done most to promote the study of the language, literature and civilisation of Ancient Greece and Rome'. Holland is the presenter of BBC Radio 4's Making History. He has written and presented a number of TV documentaries for the BBC and Channel 4, on subjects ranging from religion to dinosaurs. He served two years as the Chair of the Society of Authors; as Chair of the PLR Advisory Committee and was on the committee of the Classical Association. @holland_tom

GOR001212902
Persian Fire: The First World Empire, Battle for the West by Tom Holland
Tom Holland
Used - Very Good
Paperback
Little, Brown Book Group
2006-08-03
448
0349117179
9780349117171
Winner of Runciman Award (for the Anglo Hellenic Language) 2006 (UK)
Book picture is for illustrative purposes only, actual binding, cover or edition may vary.
This is a used book - there is no escaping the fact it has been read by someone else and it will show signs of wear and previous use. Overall we expect it to be in very good condition, but if you are not entirely satisfied please get in touch with us.