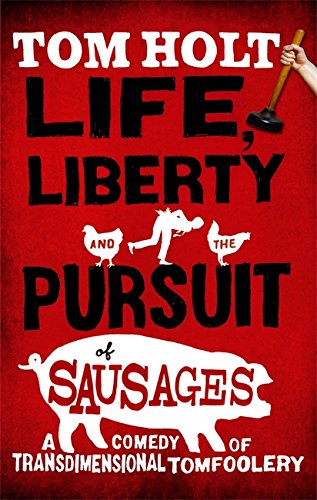 Life, Liberty And The Pursuit Of Sausages
by Tom Holt

Life, Liberty And The Pursuit Of Sausages Summary

'Anything can happen... You turn the pages wondering, 'Whatever next?''' - SFX

Polly, an average, completely ordinary property lawyer, is convinced she's losing her mind. Someone keeps drinking her coffee. And talking to her clients. And doing her job. And when she goes to the dry cleaner's to pick up her dress for the party, it's not there. Not the dress - the dry cleaner's.

And then there are the chickens who think they are people. Something strange is definitely going on - and it's going to take more than a magical ring to sort it out.

J.W. Wells & Co. Series
The Portable Door
In Your Dreams
Earth, Air, Fire and Custard
You Don't Have to Be Evil to Work Here, But It Helps
The Better Mousetrap
May Contain Traces of Magic
Life, Liberty and the Pursuit of Sausages

YouSpace Series
Doughnut
When It's A Jar
The Outsorcerer's Apprentice
The Good, the Bad and the Smug

Novels
Expecting Someone Taller
Who's Afraid of Beowulf
Flying Dutch
Ye Gods!
Overtime
Here Comes the Sun
Grailblazers
Faust Among Equals
Odds and Gods
Djinn Rummy
My Hero
Paint your Dragon
Open Sesame
Wish you Were Here
Alexander at World's End
Only Human
Snow White and the Seven Samurai
Olympiad
Valhalla
Nothing But Blue Skies
Falling Sideways
Little People
Song for Nero
Meadowland
Barking
Blonde Bombshell
The Management Style of the Supreme Beings
An Orc on the Wild Side

Customer Reviews - Life, Liberty And The Pursuit Of Sausages

Life, Liberty And The Pursuit Of Sausages Reviews

A great mix of the fantastical and the funny . . . another great satirical offering from Tom Holt that entertains thoroughly while effortlessly moving between the silly and the smart * Bookgeeks.co.uk *
Crazy, absurd, complex and hilarious . . . His writing is in the same mould as that of Terry Pratchett, Douglas Adams and Jasper Fforde * TheBookBag.co.uk *

Tom Holt's first book was published when he was just thirteen and, to his horror, he was hailed as an infant prodigy. While studying at Oxford however he discovered bar billiards and turned from poetry to comic fiction.