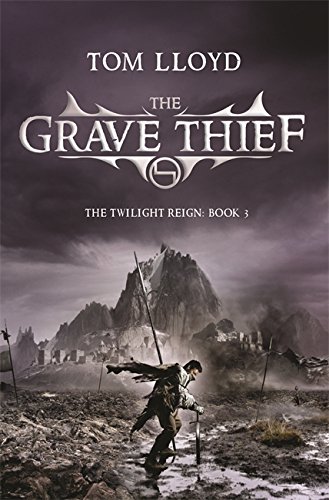 The Grave Thief
by Tom Lloyd

Used Price
£4.49
New RRP £10.99
Free Shipping in the UK
For Isak, the time for heartless decisions and ruthless action has come if he is to save the Land from its oppressors ...
Reviews:
Trustpilot
Very Good Good

The Grave Thief: Book Three of The Twilight Reign by Tom Lloyd

For Isak, the time for heartless decisions and ruthless action has come if he is to save the Land from its oppressors ...

Scree has been wiped from the face of the Land in a brutal demonstration of intent. While those responsible scatter to work on the next step in their plan, the stakes are raised - all the way to the heavens - as the Gods themselves enter the fray.

Returning home to a nation divided by fanaticism, Lord Isak is haunted both by the consequences of his actions in Scree and by visions of his own impending death. As the full extent of Azaer's schemes become clearer, he realises prophecy and zealotry must play their part in his battle-plans if there is to be any chance of surviving the coming years.

As a white-eye, Isak has had to embrace the darker parts of his own soul, but now the savage religious fervour sweeping his nation must also be accepted and turned to purpose, in the name of survival.

With the battle lines vague and allegiances uncertain, the time for heartless decisions and ruthless action has come. Two figures oppose Isak and his allies: the greatest warrior in history, who dreams of empire and Godhood, and a newborn baby whose dreams have no limit.

'Good ideas and a suitably flawed hero. The world is beautifully realised, the battles suitably grim and the dragon, when it appears, is magnificent.' - Jon Courtney Grimwood

Tom Lloyd is currently contracts manager for the London arm of an international publishing company. He lives in London.

GOR002136289
The Grave Thief: Book Three of The Twilight Reign by Tom Lloyd
Tom Lloyd
TWILIGHT REIGN
Used - Very Good
Paperback
Orion Publishing Co
2009-10-08
544
0575084928
9780575084926
N/A
Book picture is for illustrative purposes only, actual binding, cover or edition may vary.
This is a used book - there is no escaping the fact it has been read by someone else and it will show signs of wear and previous use. Overall we expect it to be in very good condition, but if you are not entirely satisfied please get in touch with us.