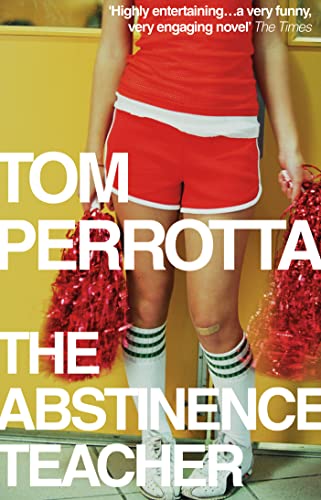 The Abstinence Teacher
by Tom Perrotta

A sharp, funny and beautifully observed satire about the disturbing influence of the Christian right from one of America's most cherished authors.

The Abstinence Teacher by Tom Perrotta

A sharp, funny and beautifully observed satire about the disturbing influence of the Christian right from one of America's most cherished authors.

Ruth Ramsey went too far. She hadn't noticed the changing climate. A Sex Ed teacher `championing' oral sex!? Not now, not in this America...

Cherished by her high school pupils as someone who'd tell it straight, after one innocent classroom indiscretion Ruth suddenly finds the curriculum she has taught for nigh on 15 years worryingly out of vogue. As the scandal flares up and attracts the unwelcome eye of the local evangelical Church, the appeasing high-school principal forces her into advocating a pro-abstinence agenda in the classroom that is at odds with all conventional wisdom. But jaded though she is by her recent divorce and fruitless search for a new love, Ruth is determined that the values she grew up with will not be sacrificed to Puritanism.

It is a syllabus change which should be considered a victory by Tim Mason - recovering addict, local football coach and recent convert to the same plaintiff Church - but his new found faith is constantly put to the test by the temptations of his former life. When he makes the gesture of leading his football team in prayer after a hard-fought victory, in which Ruth's daughter Maggie starred, he manages not only to incur the wrathful attention of her mother, but to cement his position as the star evangelist of his church - an office he is none too sure about occupying.

Scathing, witty and brilliantly observed,`The Abstinence Teacher' is a cutting portrayal of modern America and the influence of the Christian right from the acclaimed, bestselling author of 'Election' and 'Little Children'.

'Highly entertaining...At heart, this very funny, very engaging novel poses a question that seems all too pertinent in our Manichean times - why are we afraid of doubts and the mess that is human existence? And why, oh why, does there have to be a goddam answer to everything?' The Times

'An expectedly serious, fair-minded and humane look at a lonely woman and a searching man. It is surprising and unusually loving towards its characters. Perrotta is especially good on that thorniest of questions, why Americans are so drawn to evangelical Christianity.' Patrick Ness, Guardian

`This understated, relevant read from the champion of states-side suburbia brings fresh insight into the battle between the two greatest forces in contemporary America.' Observer

Tom Perrotta is the author of several works of fiction, including `Little Children', `Joe College' and `Election'. He lives outside Boston, Massachusetts.

GOR001134424
The Abstinence Teacher by Tom Perrotta
Tom Perrotta
Used - Very Good
Paperback
HarperCollins Publishers
2009-02-05
400
0007261012
9780007261017
N/A
Book picture is for illustrative purposes only, actual binding, cover or edition may vary.
This is a used book - there is no escaping the fact it has been read by someone else and it will show signs of wear and previous use. Overall we expect it to be in very good condition, but if you are not entirely satisfied please get in touch with us.