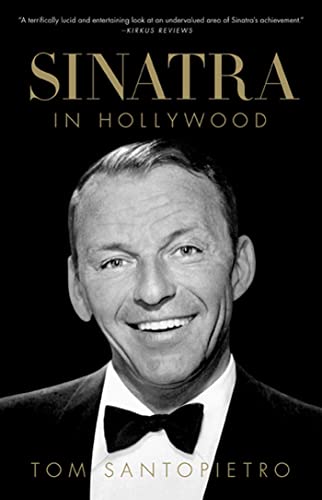 Sinatra in Hollywood
by Tom Santopietro

In Stock
£7.49
Hollywood legend, Academy Award-winning actor, and recipient of the Golden Globe Award for lifetime achievement in film, Frank Sinatra carved out one of the biggest careers in the history of Hollywood. Examining each of Sinatra's seventy film appearances, this title traces the arc of his astonishing six-decade run as a film actor.
Very Good
Only 3 left

Sinatra in Hollywood by Tom Santopietro

Hollywood legend, Academy Award-winning actor, and recipient of the Golden Globe Award for lifetime achievement in film, Frank Sinatra carved out one of the biggest careers in the history of Hollywood, yet paradoxically his screen legacy has been overshadowed by his extraordinary achievements as a singer and recording artist. Until now. With the publication of "Sinatra in Hollywood", an analytical yet deeply personal look at the screen legend of Frank Sinatra, Sinatra's standing as a significant, indeed legendary, screen actor has now been placed in full perspective. Examining each of Sinatra's seventy film appearances in depth, Tom Santopietro traces the arc of his astonishing six-decade run as a film actor, from his rise to stardom in 'boy next door' musical films like "Anchors Aweigh" and "On the Town", through his fall from grace with legendary flops like "The Kissing Bandit", to the near-mythic comeback with his Oscar-winning performance in "From Here to Eternity". Laced throughout with Sinatra's own observations on his film work, Sinatra in Hollywood deals head-on with his tumultuous marriages to Ava Gardner and Mia Farrow and directly addresses the rumors of Mob involvement in Sinatra's Hollywood career. Ranging from the specifics of his controversial acting nickname of One Take Charlie to the iconic Rat Pack film Ocean's Eleven, from the groundbreaking performance in "The Manchurian Candidate" to the moving and elegiac late-career roles as tough yet vulnerable detectives, the myths and personal foibles are stripped away, placing the focus squarely on the work.

Tom Santopietro has worked for the past twenty years in the New York theater as a manager of over two dozen Broadway shows. He is also the author of The Importance of Being Barbra and Considering Doris Day. He lives in New York.

GOR003620173
Sinatra in Hollywood by Tom Santopietro
Tom Santopietro
Used - Very Good
Paperback
Griffin Publishing
2009-11-06
544
0312590407
9780312590406
N/A
Book picture is for illustrative purposes only, actual binding, cover or edition may vary.
This is a used book - there is no escaping the fact it has been read by someone else and it will show signs of wear and previous use. Overall we expect it to be in very good condition, but if you are not entirely satisfied please get in touch with us.