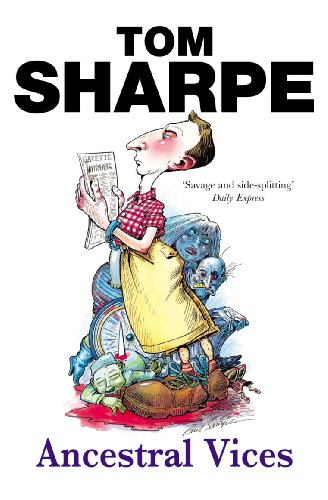 With his only friend a computer, Walden Yapp has lived a singular life. Professor of Demotic History at the University of Kloone, Yapp spends his days highlighting the corrupt capitalistic nature of the upper-classes, and his nights feeding Doris his computer the information he has gathered So when capitalist Lord Petrefact hires him to write a damaging family history, Yapp seizes the chance to chronicle the corrupt life of the Petrefact family. Spurred on by his expectations of dishonesty and depravity Yapp heads of the town of Buscott, where nobody is what they at first appear to be. Now a pawn in Lord Petrefact's vindictive family game, Yapp's presence is as welcome as the plague. From provoking dwarfish marital problems to uncovering an erotic toy factory Yapp's presence sparks a chain of events that ends in death, destruction and a murder trial. Going through a car wash will never feel the same again.

"They make me cry with laughter ... I think he's one of the great geniuses" * Daily Mail *
"Tom Sharpe is in top form ... outrageously funny ... Left-wing academics, right-wing capitalists, true-blue country gentry, workers, peasants, police and lawyers - all take custard pies full in the face in this boisterous knockabout farce" * The Listener *
"A novelist who has broken out of the pack, established a wholly distinctive style ... such a keen eye for the ridiculous and marvellous ability to puncture it" * Scotsman *
"An immense gift for social satire ... the action is unflagging" * Daily Telegraph *
"There's almost no one funnier" * Observer *

GOR001033774
Ancestral Vices by Tom Sharpe
Tom Sharpe
Used - Very Good
Paperback
Cornerstone
2002-11-07
384
0099435535
9780099435532
N/A
Book picture is for illustrative purposes only, actual binding, cover or edition may vary.
This is a used book - there is no escaping the fact it has been read by someone else and it will show signs of wear and previous use. Overall we expect it to be in very good condition, but if you are not entirely satisfied please get in touch with us.