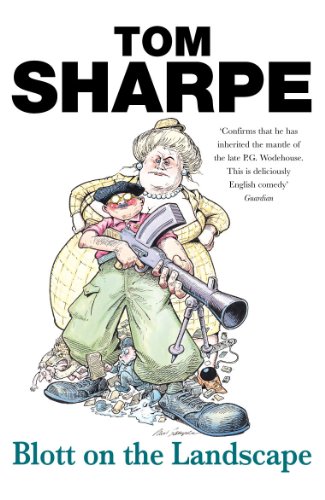 Blott On The Landscape
by Tom Sharpe

Blott On The Landscape Summary

Blott On The Landscape by Tom Sharpe

The landscape is flawless, the trees majestic, the flora and the fauna are right and proper. All is picturesquely typical of rural England at its best. Sir Giles, an MP of few principles and curious tastes, plots to destroy all this by building a motorway smack through it, to line his own pocket and at the same time to dispose of his wife, the capacious Lady Maude. But Lady Maude enlists a surprising ally in her enigmatic gardener Blott, a naturalised Englishman in whom adopted patriotism burns bright. Lady Maude's dynamism and Blott's concealed talents enable them to meet pressure with mimicry, loaded tribunals with publicity and chilli powder, and requisition orders with wickedly spiked beer. This explosively comic novel will gladden the heart of everyone who has ever confronted a bureaucrat, and spells out in riotous detail how the forces of virtue play an exceedingly dirty game when the issue is close to home.

Blott On The Landscape Reviews

"Confirms that he had inherited the mantle of the late P.G. Wodehouse. This is deliciously English comedy" * Guardian *
"Extremely funny . . . Mr Sharpe's dialogues is nifty, imaginative, enjoyable" -- Peter Ackroyd * The Spectator *
"I laughed out loud, I really did . . . Tom Sharpe is nowhere more buoyant than when mounting catastrophic scenes of hilarious mayhem" * The Statesman *
"A very funny writer indeed . . . Tom Sharpe's comedy lies as much in his language and the pace of the dialogue as in the outrageous muddles and confusions of his comic situations" * The Times *
"This exuberant novel will cheer all those who dislike bureaucracy" * Daily Telegraph *

GOR000632536
Blott On The Landscape by Tom Sharpe
Tom Sharpe
Used - Very Good
Paperback
Cornerstone
2002-11-07
352
0099435470
9780099435471
N/A
Book picture is for illustrative purposes only, actual binding, cover or edition may vary.
This is a used book - there is no escaping the fact it has been read by someone else and it will show signs of wear and previous use. Overall we expect it to be in very good condition, but if you are not entirely satisfied please get in touch with us.