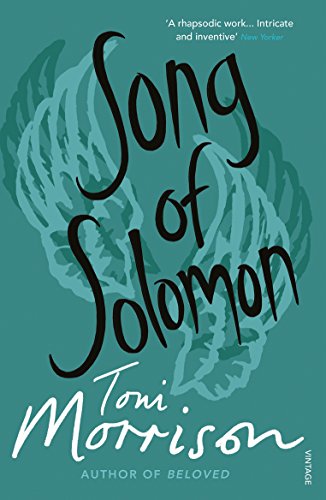 Song of Solomon
by Toni Morrison

In Stock
£101.99
Begins in 1930s America with Macon Dead Jr, the son of a wealthy black property owner, who has been brought up to revere the white world. Macon learns about the tyranny of white society from his friend Guitar. So while Guitar joins a terrorist group of poor blacks, Macon goes home to the South, lured by tales of buried family treasure.
Very Good Well Read
5 in stock

Song of Solomon by Toni Morrison

Macon 'Milkman' Dead was born shortly after a neighbourhood eccentric hurled himself off a rooftop in a vain attempt at flight. For the rest of his life he, too, will be trying to fly.

In 1930s America Macon learns about the tyranny of white society from his friend Guitar, though he is more concerned with escaping the familial tyranny of his own father. So while Guitar joins a terrorist group Macon goes home to the South, lured by tales of buried family treasure. But his odyssey back home and a deadly confrontation with Guitar leads to the discovery of something infinitely more valuable than gold: his past and the origins of his true self.
'The story of Milkman Dead and Guitar had me in thrall' Salman Rushdie, New York Times

BY THE NOBEL PRIZE-WINNING AUTHOR OF BELOVED

Toni Morrison makes me believe in God. She makes me believe in a divine being, because luck and genetics don't seem to come close to explaining her * Guardian *
A rhapsodic work... Intricate and inventive * New Yorker *
Stunningly beautiful... Full of magnificent people... They are still haunting my house. I suspect they will be with me forever -- Anne Tyler * Washington Post *
A complex, wonderfully alive and imaginative story...glittering * Daily Telegraph *
Toni Morrison's Song of Solomon grips as a novel of extraordinary truth, wisdom and humour -- Auberon Waugh * Evening Standard *

GOR001213335
Song of Solomon by Toni Morrison
Toni Morrison
Used - Very Good
Paperback
Vintage Publishing
1998-05-14
448
0099768410
9780099768418
N/A
Book picture is for illustrative purposes only, actual binding, cover or edition may vary.
This is a used book - there is no escaping the fact it has been read by someone else and it will show signs of wear and previous use. Overall we expect it to be in very good condition, but if you are not entirely satisfied please get in touch with us.