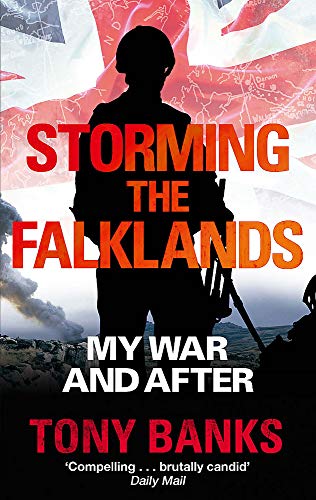 Storming The Falklands
by Tony Banks

In Stock
£1.99
The fascinating true story of the years fighting in the Falklands, and one man's struggle to readjust to ordinary life.
Very Good
Only 3 left

Storming The Falklands: My War and After by Tony Banks

Thirty years after the Falklands War 'Secret Millionaire' Tony Banks is still haunted by his experiences in the South Atlantic. As a member of the crack Parachute Regiment his unit was the first to land on the Falklands and he fought in the bloody first and last battles of the war before liberating Port Stanley.

In this memoir Tony vividly recalls the fighting in the Falklands. He relives the bombing raids in San Carlos bay, the Battle of Goose Green, the Argentinian attack on the Sir Galahad and the Battle of Wireless Ridge. But he also tells of his own battles with Combat Stress and of how three decades on the war is still claiming victims.

He tells the stories of British and Argentine veterans and travels to Argentina to return a war trophy - a trumpet he had taken from a prisoner - to its rightful owner. The return of the trumpet brings closure to both men. And finally Tony returns to the Falklands to lay the ghosts that have haunted him to rest.

Tony Banks was born in Scotland. After serving in the Falklands war, he built up a successful care home business, later appearing on Channel 4's Secret Millionnaire. This is his first book.

GOR004713063
Storming The Falklands: My War and After by Tony Banks
Tony Banks
Used - Very Good
Paperback
Little, Brown Book Group
2013-02-28
320
0349000190
9780349000190
N/A
Book picture is for illustrative purposes only, actual binding, cover or edition may vary.
This is a used book - there is no escaping the fact it has been read by someone else and it will show signs of wear and previous use. Overall we expect it to be in very good condition, but if you are not entirely satisfied please get in touch with us.