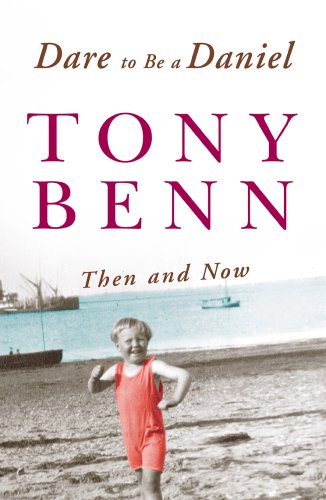 Dare To Be A Daniel
by Tony Benn

In Stock
£3.59
Born into a family with a strong, radical dissenting tradition in which enterprise and public service were combined, Tony Benn was taught to believe that the greatest sin in life was to waste time and money.
Very Good
7 in stock

Dare To Be A Daniel Summary

Dare To Be A Daniel: Then and Now by Tony Benn

Born into a family with a strong, radical dissenting tradition in which enterprise and public service were combined, Tony Benn was taught to believe that the greatest sin in life was to waste time and money. Life in his Victorian-Edwardian family home in Westminster was characterised by austerity, the last vestiges of domestic service, the profound influence of his mother, a dedicated Christian and feminist, and his colourful and courageous father, elected as a Liberal MP in 1906 and later serving in Labour Cabinets under Ramsay MacDonald and Clem Atlee. Benn followed in his father's footsteps, becoming one of the most famous and respected figures in modern British politics. Dare to be a Daniel feelingly recalls Tony Benn's years as one of three brothers experiencing life in the nursery, the agonies of adolescence and of school, where boys were taught to 'keep their minds clean' and the shadow of fascism and the Second World War with its disruption and family loss. This moving memoir also describes his emergence from World War Two as a keen socialist about to embark upon marriage and an unknown political future. The book ends with some of Tony Benn's reflections on many of the most important and controversial issues of our time.

Dare To Be A Daniel Reviews

"There is a passion in Benn's writing and speaking that far transcends the miserable aspirations of most contemporary politicians" -- Paul Foot * Guardian *
"[Benn] has a nice line in self-deprecation and hundreds of thought-provoking or funny stories. He is proud of his forebears and their achievements, bringing them alive even for people who do not share his name or even political views" * Daily Express *
"Often revealing, always entertaining... reads like a one-sided conversation, not because he hogs the stage but because people around him realize he has the most interesting things to say, so they listen" -- Jad Adams * Times Literary Supplement *
"These three wonderful hours are crammed with so many formative memories, often recalled with a laugh in Benn's familiar voice" -- Rachel Redford * The Observer *
"The essays on peace are excellent" -- Simon Jenkins * Sunday Times *

Radical statesman and Member of Parliament for over fifty years, Tony Benn is the pre-eminent diarist of his generation. His political activity continued after 'retirement' through mass meetings, broadcasts and in more recent years through social media. A widower since 2000, Tony Benn died at his home in London on 14th March 2014.

GOR001054470
Dare To Be A Daniel: Then and Now by Tony Benn
Tony Benn
Used - Very Good
Paperback
Cornerstone
2005-09-01
304
0099471531
9780099471530
N/A
Book picture is for illustrative purposes only, actual binding, cover or edition may vary.
This is a used book - there is no escaping the fact it has been read by someone else and it will show signs of wear and previous use. Overall we expect it to be in very good condition, but if you are not entirely satisfied please get in touch with us.