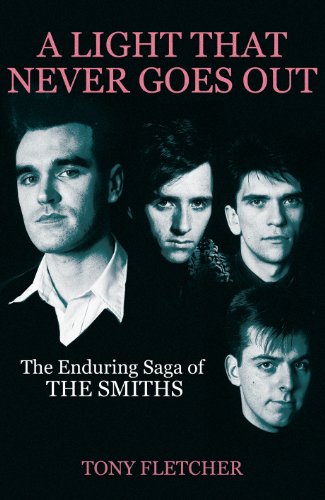 A Light That Never Goes Out
by Tony Fletcher

In Stock
£6.49
Tony Fletcher's A Light That Never Goes Out is a meticulous and evocative group biography - part celebration, part paean - moving from Manchester in the nineteenth-century to the present day to tell the complete story of The Smiths.
Very Good Good
Only 3 left

A Light That Never Goes Out Summary

A Light That Never Goes Out: The Enduring Saga of the Smiths by Tony Fletcher

They were, their fans believe, the best band in the world. Critics and sales figures told a similar story: six albums between 1984 and 1988 made number one or number two in the UK charts. Twenty-five years after their break-up, the band remain as adored and discussed as ever. To this day, there is a collective understanding that The Smiths were one of the greatest of all British rock groups. The Smiths - Morrissey, Johnny Marr, Andy Rourke and Mike Joyce - were four working-class youths who came together, by fate or chance, in Manchester in the early 1980s. Their sound was both traditional and radically different, a music that spoke to a generation, and defied the dark socio-economic mood of the Thatcher years. By early 1984, barely a year after their first headlining gig, they were the hottest - certainly the hippest - name in modern music. In the years that followed the group produced an extraordinary body of work: seventeen classic singles, four studio albums, and some seventy songs composed by the team of Morrissey and Marr. Yet for all their brilliance and adoration - their famously energetic live shows routinely interrupted by stage invasions - The Smiths were continually plagued by their reticence to play the game, and by the time of 1987's Strangeways Here We Come, they had split. The Smiths have never played together again - their enormous contribution to pop culture forever condensed into a prolific and prosperous halcyon period, their legacy intact and untarnished. Thirty years after their formation, twenty-five since they broke up, The Smiths' firmament remains as bright as ever. It's time their tale was told. Tony Fletcher's A Light That Never Goes Out is a meticulous and evocative group biography - part celebration, part paean - moving from Manchester in the nineteenth-century to the present day to tell the complete story of The Smiths. Penned by a contemporary and life-long fan, and the product of extensive research, dozens of interviews, and unprecedented access, it will serve to confirm The Smiths as one of the most important and influential rock groups of all time.

A Light That Never Goes Out Reviews

"[A] meticulous biography...This exhaustive, well-researched account brings fresh detail and thought to the party." * The Sunday Times *
"A finely judged re-telling of a remarkable tale with valuable first-hand accounts of the band's American adventures, their rapid development into a wonderful live act, plus insights into the spiralling pressures and frictions that faced the individual band members." * Sabotage Times *
"An exhaustive labour of love that was three years in the writing but which will be lapped up by fans of the band...written with a real sense of love and affection for the group who, though they were only together for a mere five years, tilted the world on its axis to a degree not seen since the heyday of the Beatles and the Stones...Fletcher is excellent when it comes to widening the view to include the cultural and historical factors behind the band's emergence and the city from which they came." * Irish Independent *
"The story of the Smiths told on the basis of interviews with just about every surviving participant in the Smiths' story. As the story winds on, a chain of no-shows, fits of pique and self-sabotage ... reaches its denouement with an episode from April 1987, just prior to the band's formal break-up. Fletcher is the first writer to have got the full story. Such material highlights the extent to which Fletcher has done his research." * Guardian *
"Tony Fletcher's account is a highly enjoyable way of revisiting [the] story. Crucially, he avoids areas well-served by other Smiths tomes and brings sufficient new material to reward even well-read fans...It's a tale that's been told before, but in his biography of the Manchester four-piece Tony Fletcher reveals new details and brings new depths to the story of Morrissey, Marr, Rourke, Joyce and the birth of the band." * Mojo *

Tony Fletcher is the bestselling author of five non-fiction books and one novel. His biography of drummer Keith Moon, Dear Boy, has been named in countless Best Music Book lists, and his authorised biography of R.E.M., Remarks Made, has been published in over half a dozen countries worldwide. Fletcher has contributed to publications including The New York Times, Rolling Stone, Spin, New York Press and SonicNet in the US, and the Observer, NME, Sky and Record Mirror in the UK. He has been seen and heard on VH1 'Behind the Music', NPR's 'Weekend Edition', BBC's 'Living Famously', and many more.

GOR004693754
A Light That Never Goes Out: The Enduring Saga of the Smiths by Tony Fletcher
Tony Fletcher
Used - Very Good
Paperback
Cornerstone
2012-09-01
704
0434022187
9780434022182
N/A
Book picture is for illustrative purposes only, actual binding, cover or edition may vary.
This is a used book - there is no escaping the fact it has been read by someone else and it will show signs of wear and previous use. Overall we expect it to be in very good condition, but if you are not entirely satisfied please get in touch with us.