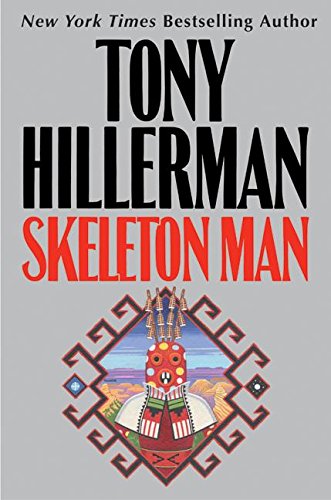 Out of Stock
£3.99
Since his retirement from the Navajo Tribal Police, former lieutenant Joe Leaphorn is running out of stories to tell at the weekly coffee klatches with his buddies. That is until he gets sucked into helping investigate what at first seems to be a simple trading post robbery. The simple kid nailed for the crime is related to a former colleague.
Like New Good
Only 0 left

Hailed as "a wonderful storyteller" by the New York Times, and a "national and literary cultural sensation" by the Los Angeles Times, bestselling author Tony Hillerman is back with another blockbuster novel featuring the legendary Lieutenant Joe Leaphorn and Sergeant Jim Chee.

Former Navajo Tribal Police Lieutenant Joe Leaphorn comes out of retirement to help investigate what seems to be a trading post robbery. A simple-minded kid nailed for the crime is the cousin of an old colleague of Sergeant Jim Chee. He needs help and Chee, and his fianc e Bernie Manuelito, decide to provide it.

Proving the kid's innocence requires finding the remains of one of 172 people whose bodies were scattered among the cliffs of the Grand Canyon in an epic airline disaster 50 years in the past. That passenger had handcuffed to his wrist an attach case filled with a fortune in -- one of which seems to have turned up in the robbery.

But with Hillerman, it can't be that simple. The daughter of the long-dead diamond dealer is also seeking his body. So is a most unpleasant fellow willing to kill to make sure she doesn't succeed. These two tense tales collide deep in the canyon at the place where an old man died trying to build a cult reviving reverence for the Hopi guardian of the Underworld. It's a race to the finish in a thunderous monsoon storm to see who will survive, who will be brought to justice, and who will finally unearth the Skeleton Man.

"A grand mystery."--Denver Post
"A fascinating whodunit and a window into a rich culture....a gem."--People
"Considerable suspense in the race to the bottom of one of the most spectacular and treacherous landscapes Hillerman's ever explored."--Kirkus Reviews
"One of his strongest and most specific plots...amusingly wry dialogue...keenly observed detail."--Santa Fe New Mexican

Tony Hillerman (1925-2008), an Albuquerque, New Mexico, resident since 1963, was the author of 29 books, including the popular 18-book mystery series featuring Navajo police officers Jim Chee and Joe Leaphorn, two non-series novels, two children's books, and nonfiction works. He had received every major honor for mystery fiction; awards ranging from the Navajo Tribal Council's commendation to France 's esteemed Grand prix de litterature policiere. Western Writers of America honored him with the Wister Award for Lifetime achievement in 2008. He served as president of the prestigious Mystery Writers of America, and was honored with that group's Edgar Award and as one of mystery fiction's Grand Masters. In 2001, his memoir, Seldom Disappointed, won both the Anthony and Agatha Awards for best nonfiction.

GOR010191705
Skeleton Man by Tony Hillerman
Tony Hillerman
Used - Like New
Hardback
Unknown
0
0060563443
9780060563448
N/A
Book picture is for illustrative purposes only, actual binding, cover or edition may vary.
This is a used book - there is no escaping the fact it has been read by someone else and it will show signs of wear and previous use. Overall we expect it to be in very good condition, but if you are not entirely satisfied please get in touch with us.