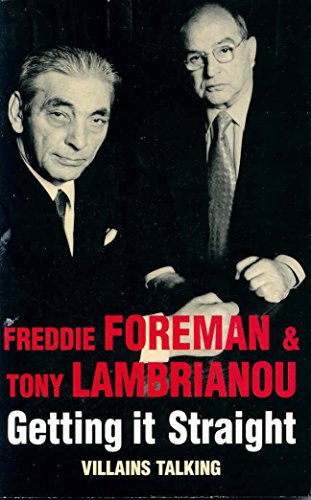 Getting it Straight
by Tony Lambrianou

In Stock
£4.49
A fresh angle on the well-loved underbelly of Britain - with lots of black humour!
Very Good
Only 1 left

Getting it Straight Summary

Getting it Straight: Villains Talking by Tony Lambrianou

Freddie Foreman (who had his own Sixties gang - which received Jack the Hat McVitie's body at the South end of the Blackwall Tunnel after the Kray murder) and Tony Lambrianou (a noted Kray henchman) in conversation about getting the facts straight, how they went straight - and who they straightened out.

Set against the backdrop of the pub Freddie used to own - and where he was arrested as acessory to murder - Tony and Freddie's conversations unfold rivetingly, covering not only their significant prison terms goings-on inside, but also astonishing fresh information on such notorious incidents as the Krays' murders and the famous Security Express heist, frank thoughts on the Kray legend and legacy, and crime today.

'Unlike other crook books, this one is a word-for-word transcript straight from the horse's mouths. . . very funny' Daily Mail

Getting it Straight Reviews

'Unlike other crook books, this one is a word-for-word transcript straight from the horse's mouths...very funny' Daily Mail

Freddie Foreman, who has been called 'the Managing Director of British Crime', has been privy to some of the most sensational criminal events of the C20th. In his headline-making autobiography RESPECT (Century/Arrow) he admitted to two gangland killings. Tony Lambrianou is of an East End family long associated with the underworld. Pan has sold over 44,000 of his autobiography, INSIDE THE FIRM. Together, their stories form a significant chapter in modern social history.

GOR000854381
Getting it Straight: Villains Talking by Tony Lambrianou
Tony Lambrianou
Used - Very Good
Paperback
Pan Macmillan
2002-03-08
400
0330490133
9780330490139
N/A
Book picture is for illustrative purposes only, actual binding, cover or edition may vary.
This is a used book - there is no escaping the fact it has been read by someone else and it will show signs of wear and previous use. Overall we expect it to be in very good condition, but if you are not entirely satisfied please get in touch with us.