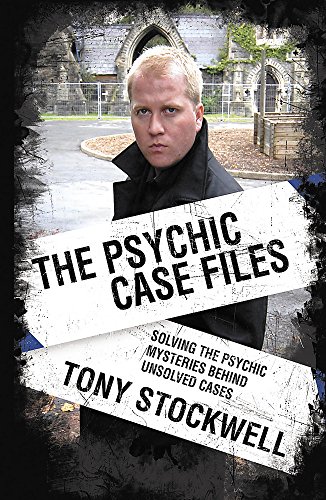 Out of Stock
Hugely popular TV psychic Tony Stockwell uses his gift to solve mysterious cases, both criminal and other.
Like New
Only 0 left

Tony Stockwell is regularly asked by victims of crime and their families, to use his psychic powers to help investigate cases that have not yielded to conventional methods.

In this fascinating collection, he opens his case files, including:

Suicide or Murder? - At the request of a family, Tony investigates the death of a young boy who died in an apparent suicide which Tony believes involved foul play.

Missing Children - Two children mysteriously disappear while their mother's back is turned. Years later, Tony reads for her and finds a clue to their whereabouts ...

And many more ... This is a treasure trove for anyone who is interested in the realm beyond our own.

Tony knew from the age of sixteen that he was destined to use his paranormal powers and be a medium. He teaches at the College of Psychic Studies in South Kensington, London. Since the transmission of his widely acclaimed series, Street Psychic, Tony has made other programmes including Psychic School and Psychic Detective for Living TV, and has been on extensive tours of the UK, Europe and New Zealand. Tony lives in Essex.

GOR010573292
Psychic Case Files: Solving the Psychic Mysteries Behind Unsolved Cases by Tony Stockwell
Tony Stockwell
Used - Like New
Paperback
Hodder & Stoughton General Division
2008-03-06
224
0340935642
9780340935644
N/A
Book picture is for illustrative purposes only, actual binding, cover or edition may vary.
The book has been read, but looks new. The book cover has no visible wear, and the dust jacket is included if applicable. No missing or damaged pages, no tears, possible very minimal creasing, no underlining or highlighting of text, and no writing in the margins.