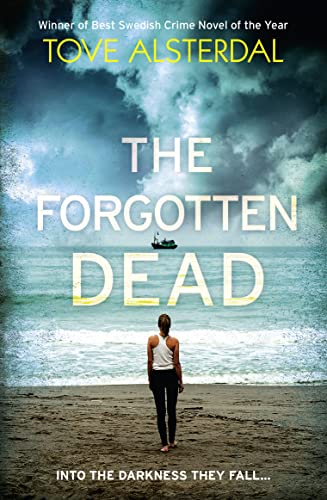 The Forgotten Dead
by Tove Alsterdal

An unputdownable thriller set in the dark underbelly of Europe, perfect for fans of I AM PILGRIM.

Into the darkness they fall...

The Forgotten Dead by Tove Alsterdal

An unputdownable thriller set in the dark underbelly of Europe, perfect for fans of I AM PILGRIM.

Into the darkness they fall...

Tarifa, Spain. A man's body washes up on the beach. No-one seems to care.

Patrick Cornwall is a highly acclaimed investigative journalist. His latest project: to uncover the plight of migrants trying to start new lives in Europe, and expose the corruption that runs to the highest levels of society.

Patrick's wife, Ally, is used to Patrick being out of contact. But she's just discovered she's pregnant, and she must track him down. Unable to reach him and starting to worry, she flies across the ocean to get answers.

Still unable to find him, Ally delves into the secrets Patrick was determined to expose, and is drawn into an ever-deadlier web. Because in the dark underbelly of Europe, where lives are cheap, the perpetrators will stop at nothing to keep their sins hidden, and their victims forgotten...

`The Forgotten Dead will keep you engrossed from beginning to end. Take a step in to the darkness, will you be able to escape? 5/5' Nudge Book Reviews

"Has all the characteristics of the Scandinavian crime novel - the suspense, the literary quality, the critical view on society - but with a global perspective. The Swedish critics are right: this is an international thriller of the highest standard." Liza Marklund

"A complex topic is condensed into this book with great finesse. Nothing is missing and nothing can be added. The balance is perfect. This first novel by Tove Alsterdal is a total success and the translation of her second book is already eagerly awaited." Huffington Post/ Canada

"Alsterdal is a gift to crime novel lovers." Sondag

"If you are only going to read one Swedish crime novel this summer, read Women On The Beach by Tove Alsterdal." 6 stars out of 6, Berlingske Tidende/Denmark

"The narrative is outstanding, making readers absorbed in the story and never letting them go. I would say she is one of the biggest debut authors this year".Sadamichi Sakai, Mystery Syndicate

"Tove Alsterdal combines deeply poignant family stories with political thriller. It is so worth every minute of the time it actually takes to read a book. She is the John le Carre of Sweden." Asa Larsson, winner of Best Crime Novel of the Year 2012

`Not many authors can pull off to tie together every day suburban life with a society in freefall, and then combine international politics and murder mysteries with a gripping portrayal of feeling very lonely in your own family. But Tove Alsterdal does exactly that. Read!' Malin Persson Giolito, winner of Best Crime Novel of the Year 2017

Tove Alsterdal is an established and well respected Swedish journalist, novel dramaturge and script writer. For the last 25 years she has written for theatre as well as paper media, television, radio, and film. She is also known as the editor of Liza Marklund's best selling crime novels.
In 2009 Tove Alsterdal published her successful debut novel The Forgotten Dead. The second one, Grave of Silence, was published in January 2012 and has been equally praised for the suspense and language, as well as a story that extends the boundaries of the genre.
Tove Alsterdal was born in 1960 in Malmoe. Her family has its roots in the very north of Sweden, a rural borderland where her second novel takes place.
She now lives in Stockholm with three daughters.

GOR008559188
The Forgotten Dead by Tove Alsterdal
Tove Alsterdal
Used - Very Good
Paperback
HarperCollins Publishers
2017-08-10
400
0008158983
9780008158989
N/A
Book picture is for illustrative purposes only, actual binding, cover or edition may vary.
This is a used book - there is no escaping the fact it has been read by someone else and it will show signs of wear and previous use. Overall we expect it to be in very good condition, but if you are not entirely satisfied please get in touch with us.