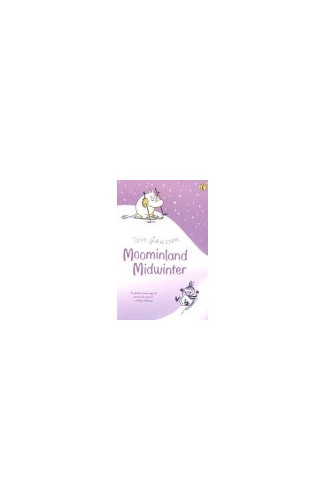 In Stock
£2.99
Moomins always sleep through the winter - or they did until the year Moomintroll woke up and went exploring in the silent, snow-covered valley where the river used to scuttle along and all his friends were so busy in summer.
Very Good Good Well Read
7 in stock

'This is snow,' Moomintroll whispered to himself.

Moomins always sleep through the winter - or they did until the year Moomintroll woke up and went exploring in the silent, snow-covered valley where the river used to scuttle along and all his friends were so busy in summer.

"The Moomin books make for both splendid bedtime read-alouds and solitary savoring." -"Wall Street Journal""This book is a marvelous new look at a time of year when many of us are huddling inside, trying to stay warm, and a good reminder during a hot summer of what to look forward to in a few short months." -"The Green Man Review""Timeless . . . Perfect for reading aloud . . . The magical adventures of the innocent Moomin family have the whimsical, surrealistic quality of Frank Baum's Oz books." - "Chicago"" Parent""The Moomins originated in Finland, found their way to England, and have now, happily, crossed the Atlantic. One couldn't ask for more engaging citizens." -"The Christian Science Monitor""The books . . . belong on the shelf next to classics like "A Wrinkle in Time" and "The Phantom Tollbooth."" -"Entertainment

GOR001149886
Moominland Midwinter by Tove Jansson
Tove Jansson
Moomins Fiction
Used - Very Good
Paperback
Penguin Books Ltd
1971-06-24
144
0140305025
9780140305029
N/A
Book picture is for illustrative purposes only, actual binding, cover or edition may vary.
This is a used book - there is no escaping the fact it has been read by someone else and it will show signs of wear and previous use. Overall we expect it to be in very good condition, but if you are not entirely satisfied please get in touch with us.